The following calculations and graphics are based on information on national CO2 emission levels worldwide published by BP[1]in June 2014 for the period from 1965 up until the end of 2013.  The data is well corroborated by previous similar datasets published by the CDIAC, Guardian [2] and Google up until 2009 [3].

These notes and figures provide a short commentary on that CO2 emissions history.

The contrast between the developed and developing worlds is stark in terms of their history of CO2 emissions and the likely prognosis for their future CO2 output. 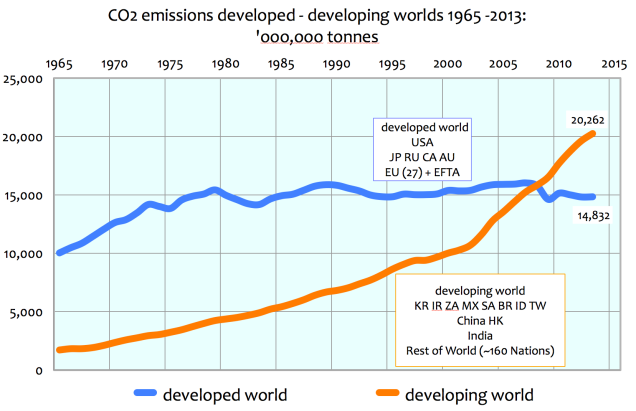 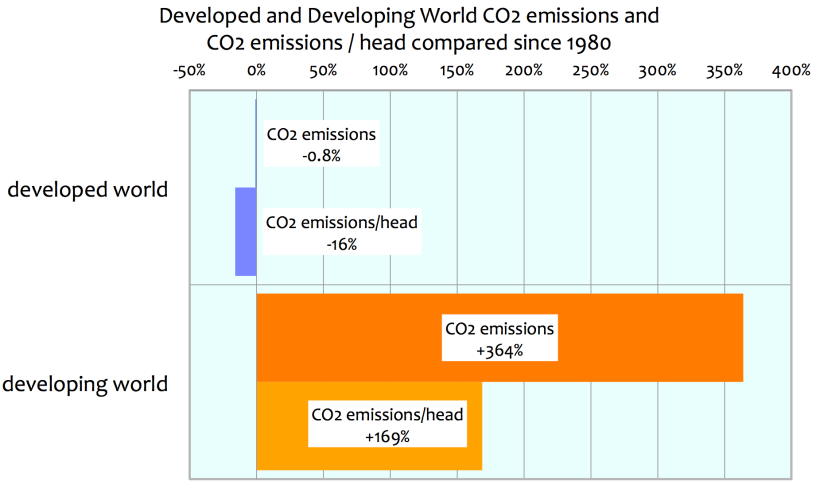 In October 2010 Professor Richard Muller made the dilemma for all those who hope to control global warming by reducing CO2 emissions clear: in essence he said[4]:

“the Developing World is not joining-in with CO2 emission reductions nor does it have any intention of doing so.

The failure of worldwide action negates the unilateral action of any individual western Nation”. This presentation divides the world nations into seven logical groups with distinct attitudes to CO2 control: 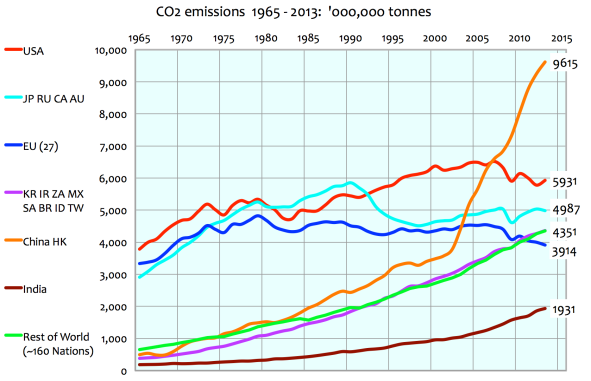 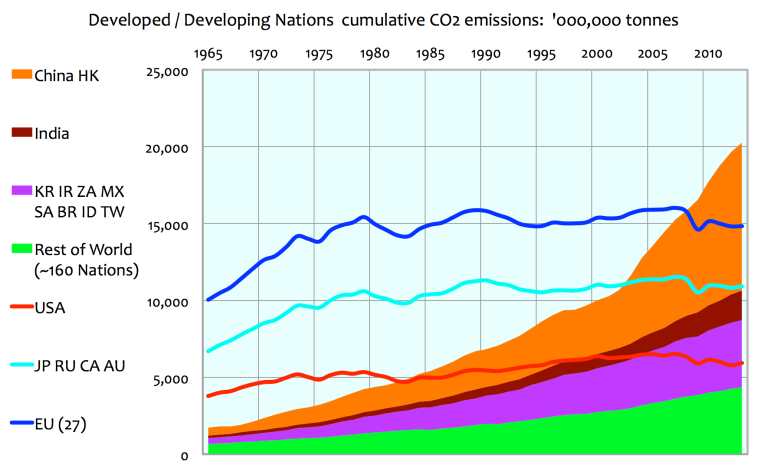 These graphs of total CO2 emission history show that up until 2013:

However probably more significant than the total CO2 emissions output is the comparison of the emissions/head for the various nation groups. 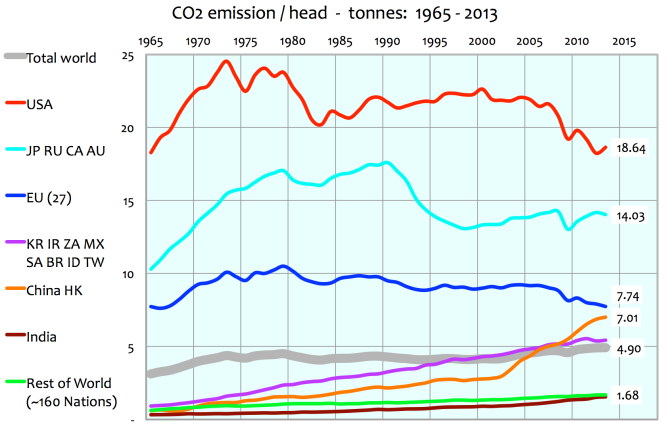 When the participating nations particularly EU(27) are compared with Chinese CO2 emissions/head, an interesting picture arises: 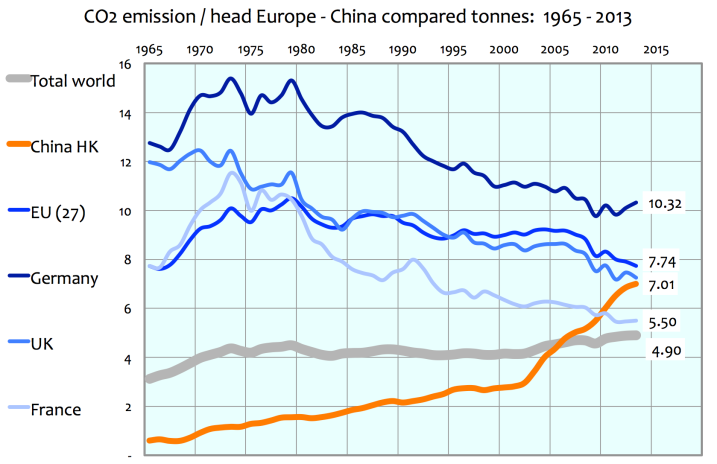 Chinese CO2 emissions at 7.01mt/head for its 1.4 billion population are already ~43% greater than the worldwide average. Those emissions are still growing fast.

At 5.5mt/head, France, with ~80% nuclear electricity generation, has the lowest CO2 emission rates in the developed world and is at only ~12% above the world-wide average.

The UK at 7.2mt/head is now only ~48% higher than the world-wide average and only about ~3% higher than China. So China is likely to overtake the UK in the near future.

Germany, one of the largest CO2 emitters in Europe, has emissions/head ~100% higher than the worldwide average and is still ~49% higher than China. Germany’s emissions/head have increased recently because they are now burning much larger quantities of brown coal to compensate for the “irrational” closure of their nuclear generating capacity.

This must question the logic of Green attitudes in opposing Nuclear power. Following the Fukushima disaster, the German government position of rapidly eliminating nuclear power in a country with no earthquake risk and no chance of tsunamis should not be tenable.

Professor Fritz Vahrenholt was CEO of RWE Innogy, the major German windpower supplier, he had pioneered Germany’s significant advances in renewable energy, especially in the development of wind power.

Previously Professor Vahrenholt had fully accepted the IPCC reports as the foundation of his understanding of mankind’s effect on climate change. However, with his scientific background as chemist, he re-examined IPCC reports in detail. He found many errors, inconsistencies and unsupported assertions.

Accordingly he has now entirely revised his position.

Professor Vahrenholt’s diagram below is from his July 2012 lecture at the Royal Society [12] [13].

It shows the miniscule impact of the enormously costly efforts at decarbonisation in Germany, (die Energiewende), in comparison with the inevitable escalation of CO2 emissions from the rest of the world.

The underdeveloped nations are bound to become progressively more industrialised and more intensive users of fossil fuels to power their development and widen their distribution of electricity throughout their populations.

This is the only rational way that those nations can advance their development status. 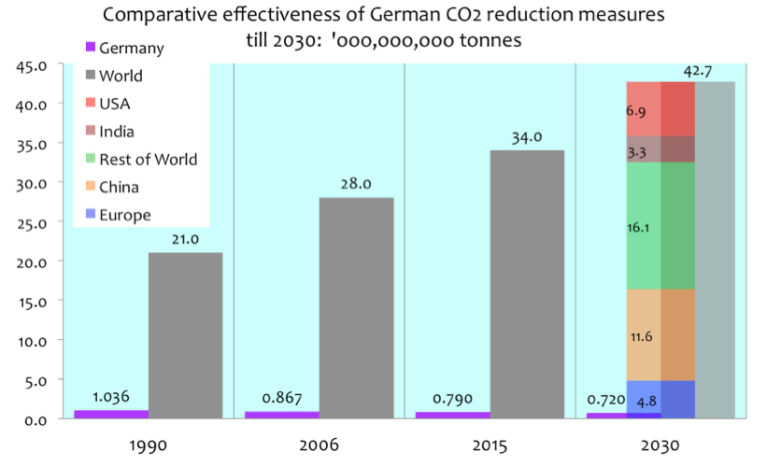 The futility of the expenditure of vast resources on Green activities in Germany becomes clear.

German actions with its increasing risks to energy security and the growing risk to the German economy as its manufacturing industries seek more congenial energy / business environments, could only ever reduce Germany’s CO2 emissions by ~150,000,000 tonnes between 2006 and 2030.

That would only amount to ~1/100 of the concomitant growth in other CO2 emissions from the developing world.

According to Bjorn Lomborg the ~€125billion German investment in solar power alone, not including other renewable investments, can only reduce the onset of Global Warming by a matter of about 37 hours by the year 2100[14]. 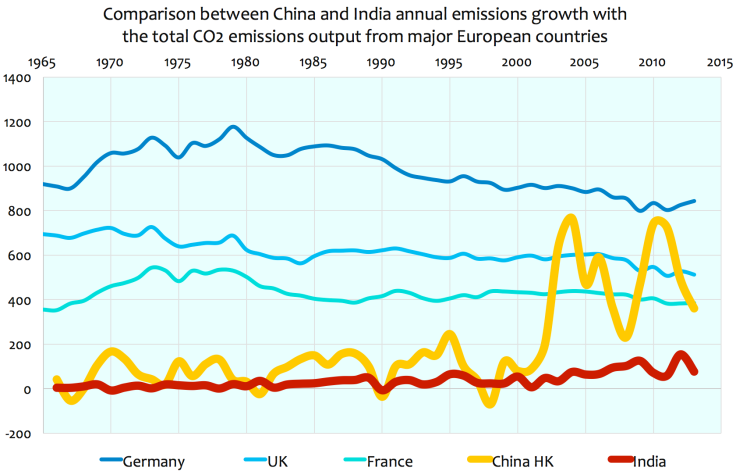 This point is re-emphasised above, by cross comparing the annual growth in emissions from China and India with the full annual emissions from key European countries. Chinese CO2 emissions growth in some years can exceed the total UK and French emissions level and even approach the German level on occasions.

Professor Varhenholt is now convinced that it is nature and in particular the behaviour of the sun that is responsible for our continually changing climate, and as he said as the final point of his Royal society lecture:

“This change can only develop first with a revolution of our minds.”

and to paraphrase Bill Clinton

Professor Varhenholt and his colleague Sebastian Luening have now published a best seller in Germany “Die Kalte Sonne”, the book now released in English as

“The Neglected Sun: Why the Sun Precludes Climate Catastrophe”[15].