The late Professor David Mackay, the former chief scientist in DECC, in his final interview with Mark Lynas in April 2016 stated that powering the UK with Renewable Energy is “an Appalling Delusion”.

These analyses reinforce his final assertion in terms of UK power production and performance costs:

Two data sets are used in this analysis.

Here these values US  EIA US$ values have been translated into £/GW and £/GW/year.  It is thought that the US  EIA data on comparative costs although oriented towards the USA are probably a reasonable and careful estimate of comparative costs and performance. This table also shows the anticipated life of these technologies and their capacity factors.

The capacity factors assumed for all dispatchable power sources, including Green mandated technologies are rated quite high, (90%), of course pumped storage facilities such as Dinorwig have a limited generation time, (about 5 hours at full 1.5GW output).  On the other hand capacity factors for weather dependent Renewables are comparatively low:

This data then enables estimates not only comparative capital costs but also estimates made of the overall comparative cost over a sixty year lifetime of the technologies.  These estimated lifetime costs do not include the likely costs of demolition and site restoration, which are likely to be substantial particularly for weather dependent Renewables.

The different power generation technologies have been grouped as:

The Power production by technology in the UK is derived from the DUKES Digest of UK energy statistics for 2015:

These data sets in combination result in the following chart showing the comparative performances of different classes  of technology presented as percentages of the overall expenditures involved. 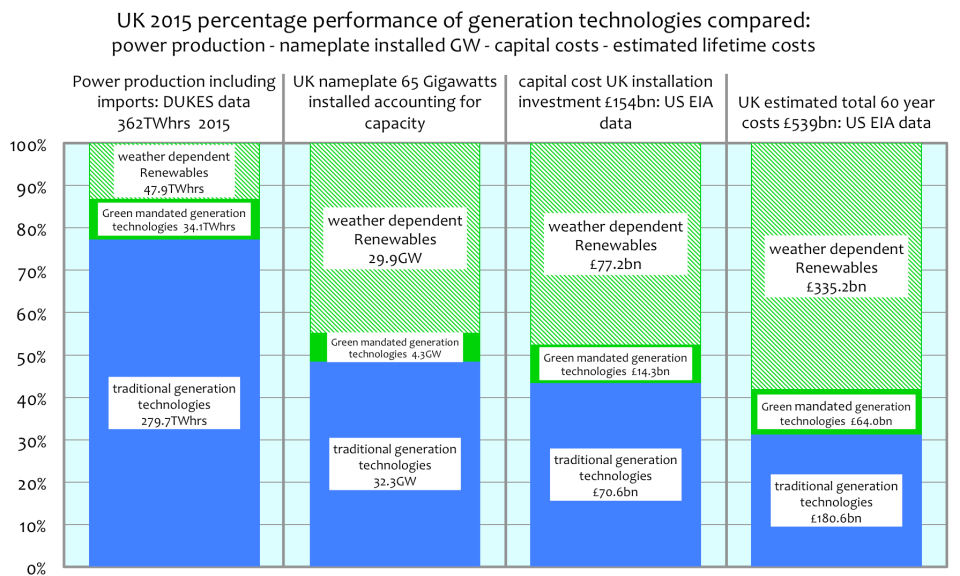 In 2015 weather dependent Renewables produced about 13% of the power output but their costs were about 44% of the capital investment and over a 60 year lifetime they would absorb ~54% of the costs.

Aggregated traditional generation technologies, including the imports, (mainly from French Nuclear power), provided ~77% of UK power but cost only ~46% in capital terms and are likely to cost even less at ~34% of the lifetime costs.

At ~6% the UK already has significant dependence on electrical power imports.  This would seem to be a real point of weakness for the point of view of continuing UK energy security:  there should be no assumption that such imported electrical power will always be available to meet demand in the UK whenever desired, either from a Europe-wide adverse weather event or from European demand being given priority over the needs of the neighbouring UK.

The DUKES data for 2015 is shown as the pie chart below.

Essentially this chart shows the weather dependent renewables only provided  ~13% of the power in 2015.  However more significant was that only 2% of total power requirements were provided by Solar power.

There are three major sources of Green mandated generation shown individually.  They amount to ~9.5% of UK generation from burning waste, Drax and burning vegetable matter as fuel.

Drax, a major Yorkshire power station is included as a separate Green mandated power source.  The power station has been converted to burn wood chips harvested by the destruction of forests in on the Eastern seaboard of America.  The CO2 saving resulting from this exercise has to be questionable.  It involves clear felling of mature forest in the Eastern seaboard of the USA, drying and pelletising the wood and then transporting the wood pellets across the Atlantic:  this is especially questionable as the Drax power station was intentionally sited on a major existing coal field.

This chart omits the use of oil as fuel.   Oil-firing only accounts for about 0.6% of the power generated.  However that 0.6% may on occasions be crucial to the maintenance of stability for the grid.  Oil based power input is mostly accounted for by extreme emergency measures to prevent grid failure with stand-by generation on the occasions when Renewables are failing to provide power, it is known as STOR  Short Term Operating Reserve.

Thereafter from the DUKES power output in Terawatt hours:

David Mackay,s assertion of the “appalling delusion” is very well exemplified by the recent escalated installations of Solar energy in the UK.

The following chart shows the comparison between Gas-fired generation and Solar power in the UK.

But in 2014 and 2015 the UK trebled its Solar Energy installations. From being the sixth largest Solar PV installation in Europe, by 2015 the UK had increased its solar commitment to being the third largest in Europe, only now surpassed in Germany and Italy.  These were by far the most rapid growth rates for Solar installations in Europe.

According to David Mackay, this substantial and rapidly escalated commitment to Solar energy has been made in spite of the clear adverse advice, from the professional civil servants at the UK Department of Energy and Climate Change, (DECC). They always asserted that, as policy, Solar Energy should never have been considered viable in the context of the UK environment, because of:

As a result the recorded capacity factor for Solar energy in the UK is less than 9%. This is the least performant Solar power in Europe.

Nonetheless by 2015 the UK solar installation had escalated to a total of about 9.6GW nameplate capacity but yielding the equivalent of only about 0.86GW of power.  Using US EIA data of overnight capital comparative costs, the total capital value committed to solar installations amounted to about £24 billion by 2015.

Using the same, US EIA comparative figures, this £24 billion capital investment could have provided:

The full amount of ~£24 billion cumulative capital expenditure on Solar energy up till 2015 is never stated explicitly, because the full sum is well disguised.  However the full amount is exposed by using the US  EIA comparative data.

Whilst the proposed costs of Hinckley Point C, (at ~£18billion), are questioned by government as to their viability, the much greater sum expended to contribute less than 1 Gigawatt of power on UK Solar installations has simply been ignored.

This very significant sum, ~£24 billion, has knowingly been wasted by central government, (then DECC), at the expense of the UK taxpayer and the UK electricity buyer.  This has to be the most egregious waste of UK National resources incurred as a result of following Green policies and dogma in the UK.

By 2015 weather dependent Renewables, wind and solar, amounted to ~38% of the installed nameplate capital value of electrical generating capacity in the UK.

The total output of weather dependent Renewables by then was ~13% of the UK energy requirements, but these renewable energy sources were unlikely to be available as and when needed, as they are weather dependent these Renewables are both intermittent and non-dispatchable.

Weather dependence means that Wind and Solar power are non-responsive to energy demand:

Accordingly all wind and solar generating technologies require full generating back up to maintain the viability of the grid, whenever the vagaries of the weather and the rotation of the earth mean that they are incapable of producing power. Currently that back up can only come from nuclear energy or from the use of fossil fuels.  Batteries or other storage capabilities, such as pumped storage of sufficient scale are just not feasible on grounds costs and the non-mountainous geography of the UK.

As David Mackay clearly stated in his final interview, “if there is sufficient generation capability on hand as back up to provide adequate electricity supplies all the time throughout the winter, there is no point in spending additional money on inefficient and costly weather dependent Renewable energy technologies”.

However in the UK it seems that although more than adequate dispatchable Gas-fired power capacity is available, this reliable power source is not used because of the policy of the Renewables Obligation, whenever some level of Renewable energy is available.

Weather dependent renewables, wind and solar, only operate in accordance with the vagaries of the weather.  They therefore generate substantially less electrical output than their rated nameplate output.  See;

Coherent data on the temporal output form UK Solar installations is not readily available but comprehensive aggregate data is provided by the DUKES dataset.

The temporal intermittency and unreliability of Solar and Wind power is probably best illustrated using the German Energiewende Agora website.

In Germany the nameplate value of weather dependent Renewable installations is as follows:

Recent winter and summer month profiles of Renewable contribution to German power demand is shown below: 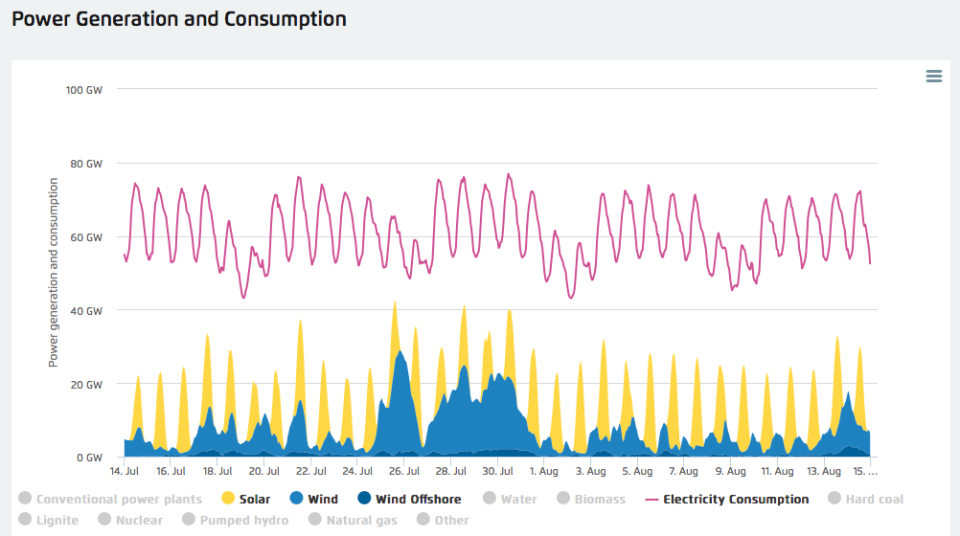 Solar power will always diminish to zero every night. The  duration of its output inevitably varies with the seasons.  Performance is much better, (about nine times), in the summer than in the winter when on occasions solar arrays will only produce a minor output for a short period around a fine midday.

Wind power output can on occasions produce worthwhile power output. But it ranges from virtually nil output up to its maximum. Timing of power production is entirely unpredictable. And as these graphs show it is possible / probable that wind power will be at low level across a whole nation even as large as Germany for more than a day at a time.

So as it is weather dependent, it can not be relied upon to produce to meet demand as needed as opposed to when the status of the weather dictates.

It is incredible that inspite of the considerable expenditure ~£24 billion on ~9GW of installed Solar power in the UK, the UK power reporting mechanism Gridwatch does not include any separate reference to the contribution that solar power makes to the UK energy grid.