Earth has existed for some 4,600 million years.  This condensed history sets the current concerns about the level of atmospheric CO2 and the recent possible impact of any extra Man-made CO2 affecting global temperature in context.

CO2 in the atmosphere

To understand the context of current concerns about the increase of CO2 in the atmosphere from the Man-made activities, it is useful to review the long-term history of the Earth’s atmosphere 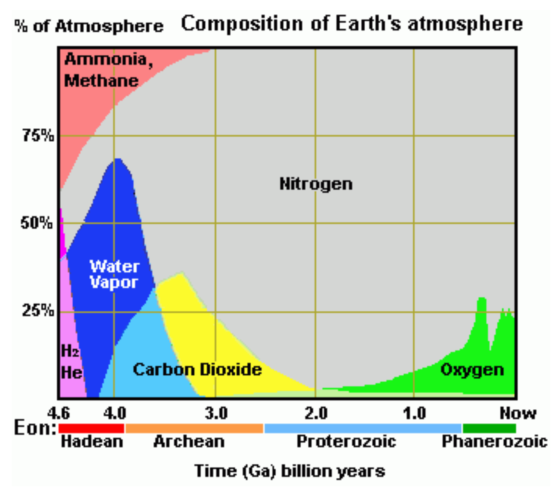 The Phanerozoic Eon:  the most recent 600 million years

It is only in last 600 million years, the Phanerozoic Eon, (meaning, visible life), that Life on earth developed and advanced radically.  The following observations arise from the Scotese – Berner representation of the Phanerozoic Eon:

About 2,600,000 years ago the World again descended into a true Ice Age, with the establishment of permanent ice sheets at both poles.  The world is now living in that continuing Ice Age.  There is no indication of how long Planet Earth may remain in its current state of long-term glaciation.

These long-term ice-age conditions have generally maintained global temperatures as much as 8°C lower than during our present Interglacial, resulting in massive Ice sheets covering much of the currently inhabited portion of the land mass of the Northern Hemisphere.

During those 100,000 year-long glacial periods CO2 levels have always fallen significantly.  This is a result of colder oceans being again capable of re-absorbing CO2 from the atmosphere.  Once transferred to the Oceans, CO2 is lost permanently from the atmosphere, as it is sequestered by marine life forming their protective shells:  these eventually sink and progressively form limestone rocks.

Variations in the planetary and orbital geometry within the Solar system have meant that this state of glaciation has been punctuated fairly regularly, at roughly ~100,000 year intervals by interglacial periods, when temperatures have risen.

Interglacial warming episodes cause an enormous, positive but temporary change in the habitability of Planet Earth.

These warmer interglacial periods have always been very productive for the biosphere and most recently for the developmental success of Man-kind for the last 10,000 years.

As Oceans warm during Interglacials, they can no longer retain as much dissolved CO2 and as a result they slowly out-gas CO2.  Accordingly atmospheric CO2 increases following any temperature increase, the process of out-gassing is delayed by about 800 years.

Interglacial periods generally last 10,000 – 15,000 years.  The rate of temperature change from full glacial conditions to the benign environment of an interglacial can be very sudden on the geological timescale.  This level of rapid change was seen at the end of the Eemian interglacial ~120,000 years ago and in the rapid temperature recovery at the beginning of our own benign Holocene Epoch.

Across the 110,000 years of the last interglacial, there were many sudden warming and cooling excursions unaffected by any Man-made intervention.  These rapid changes have exceeded the rate of the recent, warming at the end of the 20th century, which is asserted were artificially induced solely by Man-made CO2 emissions.

Most Interglacial periods have been warmer than the present Holocene:  in the previous Eemian interglacial Hippopotami thrived in the Rhine delta some 120,000 years ago.

Our current Holocene epoch is just the most recent of these periodic, warmer, geologically short interglacial intervals.  The current warmish Holocene interglacial has been entirely beneficial to the Biosphere and Man-kind World-wide.

The Holocene Epoch has been the enabler of Man-kind’s civilisation for the last 10,000 years.  The congenial climate of the Holocene epoch spans from Man-kind’s earliest farming to the scientific and technological advances of the last 200 years.  The temperature profile of the Holocene interglacial is remarkable, when compared to the previous interglacial periods:  the temperatures have been lower, the profile apparently flattened and somewhat prolonged.

It is useful to look at climate change from a longer term, century by century and even on a millennial perspective, when considering the scale of temperature changes that “Climate Alarmists” predict arising from Man-made CO2 induced Global Warming and their view of the disastrous effects of additional Man-made Carbon Dioxide emissions in the later part of the last century.  The temperature excursions shown by the Greenland Ice core records across the Holocene can be seen to be minor in comparison to the future modelled temperature assertions of Climate Alarmists.

have been progressively colder than each previous high point.

this temperature increase has been “rebranded” as the:

Note that the much vaunted and much feared political “fatal” tipping point of +2°C would only bring Global temperatures back to the level of the very congenial climate of “the Roman warm period” 2000 years ago.  Were possible to reach the “horrendous” level of +4°C+, postulated by Alarmists, that extreme level of warming would still only bring temperatures to about the level of the previous Eemian maximum, a warm and abundant epoch, when hippopotami thrived in the Rhine delta.  For a more comprehensive views of the decline of the Holocene see:

Climate and Human Civilization over the last 18,000 years

The effect of future CO2 growth

As well as the out-gassing of CO2 from warmer oceans, atmospheric CO2 concentration has also seen a contribution of Man-made CO2 emissions from the use of fossil fuels over the past 200 years as the industrial revolution has advanced.  The records show that at present atmospheric CO2 is increasing from both these sources in combination is at about 2ppmv / year.  About half of any extra CO2 emissions are absorbed virtually immediately by the Oceans and/or processed within the Biosphere.

As life has thrived and as plants evolved with CO2 levels at more than 10 times this level, any recent comparatively minor increase of atmospheric CO2 ought not to be of any real concern:

Climate Sensitivity is defined as the temperature effect of doubling atmospheric CO2 concentration.  This is the value assessed by Climate Modellers as their definitive result on which to base international climate policy.

A simplified estimate of the potency of CO2 as a Greenhouse gas is that its effectiveness diminishes logarithmically as concentration increases.  A simple, “back of the envelope calculation”, can thus show the likely temperature effect of doubling of atmospheric CO2 concentration from the current 410ppmv up to a future 820ppmv.  That calculation takes no account of any possible water vapour and cloud feedbacks, which might enhance but which are equally likely to reduce the temperature effect of any added CO2.

The assumptions behind the calculations and graphic below are as follows:

The diagram above shows how:

This paper shows detailed results for all greenhouse Gases and their combined effect on the thermal radiation to space and thus their influence on Earth’s surface temperatures according to ~300,000 frequency bands.  It also assesses the the difference in radiation to space of differing concentrations of CO2 from 400 – 800 ppmv.

The atmospheric temperatures and concentrations of Earth’s five most important, greenhouse gases, H2O, CO2, O3, N2O and CH4 control the cloud-free, thermal radiative flux from the Earth to outer space. Over 1/3 million lines having strengths as low as 10−27 cm of the HITRAN database were used to evaluate the dependence of the forcing on the gas concentrations. For a hypothetical, optically thin atmosphere, where there is negligible saturation of the absorption bands, or interference of one type of greenhouse gas with others, the per-molecule forcings are of order 10−22 W for H2O, CO2, O3, N2O and CH4. For current atmospheric concentrations, the per-molecule forcings of the abundant greenhouse gases H2O and CO2 are suppressed by four orders of magnitude. The forcings of the less abundant greenhouse gases, O3, N2O and CH4, are also suppressed, but much less so. For current concentrations, the per-molecule forcings are two to three orders of magnitude greater for O3, N2O and CH4, than those of H2O or CO2. Doubling the current concentrations of CO2, N2O or CH4 increases the forcings by a few per cent. These forcing results are close to previously published values even though the calculations did not utilize either a CO2 or H2O continuum. The change in surface temperature due to CO2 doubling is estimated taking into account radiative-convective equilibrium of the atmosphere as well as water feedback for the cases of fixed absolute and relative humidities as well as the effect of using a pseudoadiabatic lapse rate to model the troposphere temperature. Satellite spectral measurements at various latitudes are in excellent quantitative agreement with modelled intensities.

The graphic below summarises those results at temperate latitudes.  The effect of added CO2 up to 800ppmv is the difference in area between the red and black curves in other words just ~3 Watts / square meter.  That amounts to a 1%  reduction of the radiation to space and confirms that as an overall estimate of logarithmic diminution of CO2 warming effectiveness is reasonable. 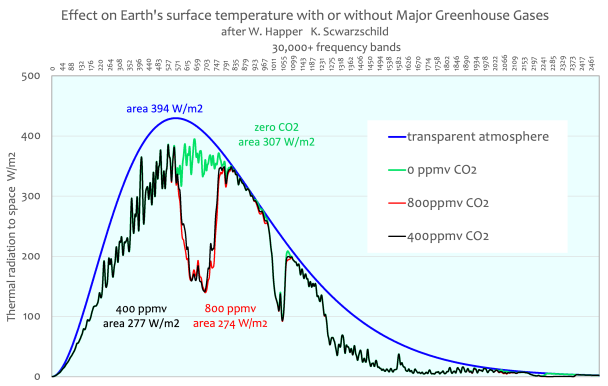 Further graphs can represent differing environments, at different latitudes with differing climates at differing cloudiness and humidity across the world:  nonetheless they all show the same fundamental picture.  Other natural feedbacks may on occasions change the parameters nonetheless the basic result remains.  At a maximum the value for Equilibrium Climate Sensitivity can not be greater than +0.75°C.

As Will Happer said in a recent lecture

“The important point here is the red line on this chart.  It shows what would happen if the concentration of CO2 was doubled.  The gap between the black line and the red line shows the extent of the effect of doubling CO2.  So, you can see that doubling CO2 now makes virtually no difference.

On the basis of this miniscule difference, we are supposed to give up our liberties, give up the gasoline engines in our automobiles, give up all the benefits of Western Industrial society and submit to dictatorial Government controls.

The message I want you to understand is:  don’t let anyone convince you that is a good bargain:  it is in fact a terrible bargain.”

If the limited future temperature effect of additional atmospheric CO2 is anywhere close to reality this result means that:

So, any CO2 emissions reductions made in the Western World with their resulting sacrifices of wellbeing will be overtaken and soon further exceeded by the activities of the Developing and Eastern worlds.

It should be realised that climate change policies in the West are being enacted not on valid scientific evidence showing minor temperature effect for further Man-made CO2 emissions but on the basis of quasi-religious emotions and active government propaganda.

So, all efforts in the West at CO2 emissions reduction are futile, just inducing massive economic self-harm to Western Nations.