The following calculations and graphics are based on information on worldwide CO2 emission levels published by BP in June 2018 for the period from 1965 up until the end of 2017.

The data can be summarised as follows:

Some initial points arising from the BP data:

Even as long ago as October 2010 Professor Richard Muller made the dilemma for all those who hope to control global warming by reducing CO2 emissions, particularly by means of CO2 reductions from Western Nations, clear:  in essence he said:

“the Developing World is not joining-in with CO2 emission reductions nor does it have any intention of doing so.  The failure of worldwide action negates the unilateral action of any individual Western Nation”.

This analysis divides the world’s nations into seven logical groups with distinct attitudes to CO2 control:

These data is set out in tabular form below.

These graphs of total CO2 emission history show that up until 2016:

There has been a very rapid escalation of Chinese CO2 emissions since the year 2000.

Global CO2 emissions had previously plateaued.  But since 2016 they have shown a significant uplift.  Unsurprisingly the emissions growth has occurred in the developing nation groups India, Rest of World as their quality of life is progressively improving.  After a fall in 2015 -2016 in 2017 the was a significant uplift in Chinese emissions.  In spite of the Europe wide efforts EU(28) emissions have also been growing overall.

Notably the only Nation that has consistently reduced its CO2 emissions is the USA.

With increasing installation of Coal-Fired generation throughout the developing world it is now likely that Global CO2 emissions will continue to show significant growth thus entirely negating the objectives of the Paris Climate accord.

Possibly more significant than the total CO2 emissions output is the comparison of the CO2 emissions / head for the various nation groups.  This measure represents the level of development of various Nations. 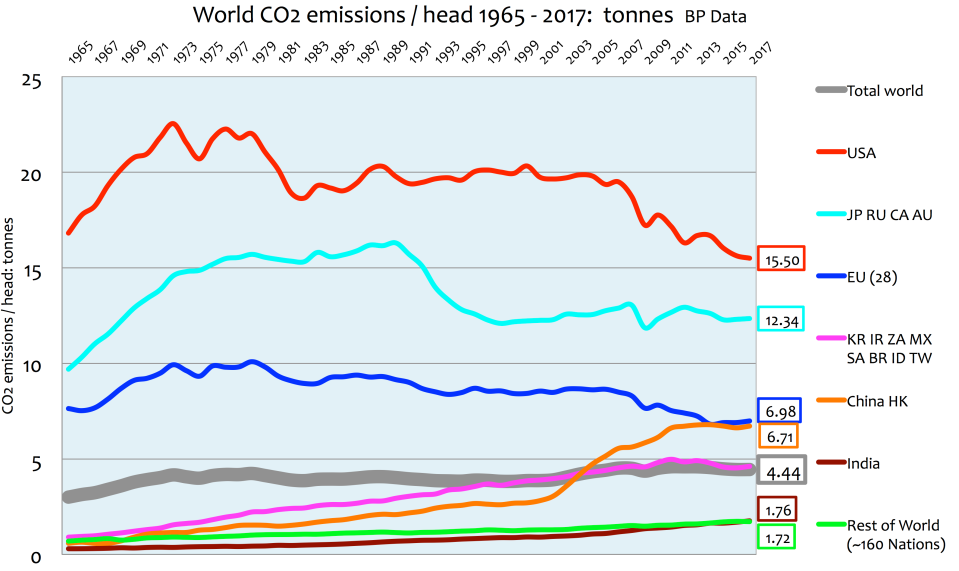 To bring CO2 emissions / head in the developing world up to:

When the participating nations particularly in the environmentally active  / Green aware EU are compared with Chinese CO2 emissions/head, an interesting picture arises, as follows. 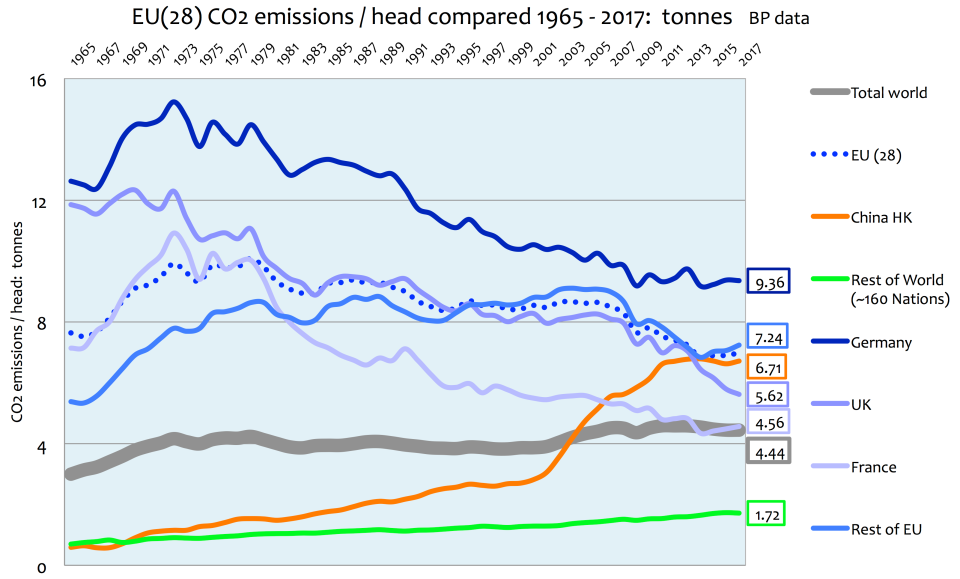 The unique performance of France as a developed country in limiting its CO2 emissions must question the logic of Green attitudes in opposing of Nuclear power.  If CO2 emissions really were a concern to arrest Catastrophic Anthropogenic Global Warming / Man-made Climate Change, these results, particularly from France, show starkly the very real advantage of using Nuclear power for electricity generation.

But even France’s commitment to Nuclear power is now being questioned.  Green attitudes in the French government are thus now threatening to destroy one of France’s supreme national assets, i.e. its commitment to reliable Nuclear energy for electricity generation, which if it were an advantage, have no significant CO2 emissions.

The futility of Western de-carbonisation

Western industrial companies are bound to seek more congenial energy / business environments, with laxer attitudes towards CO2 emissions to maintain the performance of their businesses.  So the futility of the expenditure of vast resources on Green activities in Germany and throughout the Western world becomes clear.

An estimate of the additional 60 year lifetime cost commitment of some €2.0 trillion that has already been committed for the installation of Weather Dependent Renewables in Europe is given at

https://edmhdotme.wordpress.com/estimating-the-excess-costs-of-weather-dependent-renewables-over-gas-firing-for-generation-in-the-eu28-and-the-usa/
According to Bjorn Lomborg the ~€125billion German investment in solar power alone, not including other renewable investments, could only ever reduce the onset of Global Warming by a matter of about 37 hours by the year 2100, if at all.
http://www.lomborg.com/content/2013-03-germany-pays-billions-delay-global-warming-37-hours
In addition in their recent paper the prestigious French Société de Calcul Mathématique SA have clearly said:“The battle against global warming: an absurd, costly and pointless crusade”
http://www.scmsa.eu/archives/SCM_Global_Warming_Summary_2015_09.pdf
And more recently Bjorn Lomborg has produced evidence that the total effect of any agreement in the terms proposed in Paris could only control future warming in 2100 by less than 0.2°C.
http://judithcurry.com/2015/11/09/lomborg-impact-of-current-climate-proposals/#more-20393