However, Man-made Global Warming caused by CO2 emissions from burning fossil fuels is far from being an immediate and existential threat to the Planet.

But instead Man-made Global Warming now may result in a minor, probably advantageous warming event far in the future.

Such Man-made warming could well be overtaken by planetary cooling arising from much more powerful natural causes, like the effects of low Solar activity and planetary mechanics. 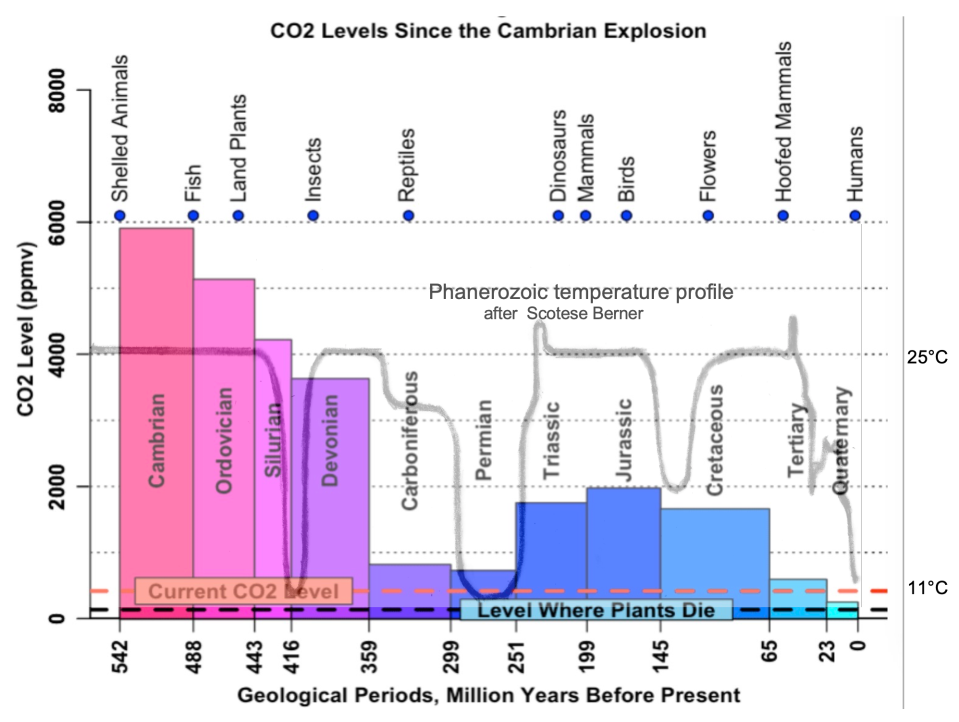 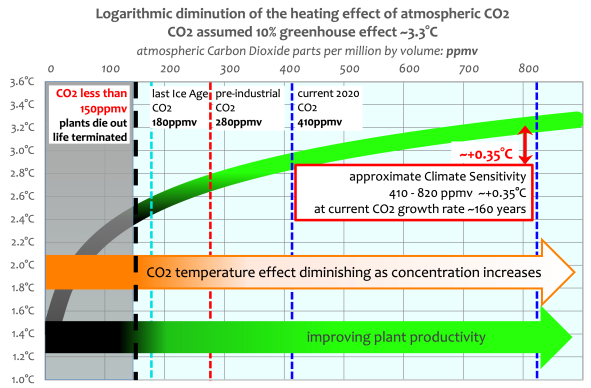 The previous diagram is a simplification resulting in an Equilibrium Climate Sensitivity in the region of +0.35 °C.

So, any concern about their further temperature effects of all Greenhouse gasses is now simply alarmist. 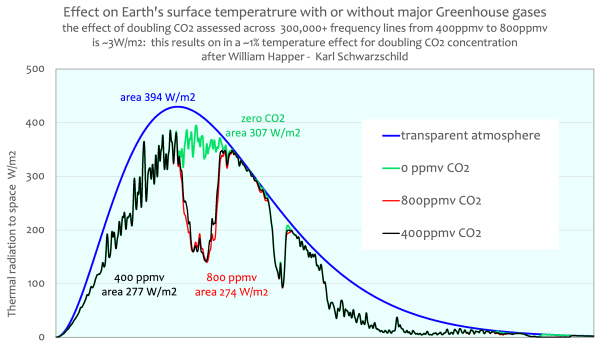 As Will Happer said in a recent lecture:

“The message I want you to understand is:  don’t let anyone convince you that is a good bargain:  it is in fact a terrible bargain.”

Further analyses may represent differing environments, at different latitudes with differing climates at differing cloudiness and humidity across the world:  nonetheless they all show the same fundamental picture.  Other natural feedbacks may on occasions change the parameters nonetheless the basic result remains.  At a maximum the value for Equilibrium Climate Sensitivity cannot be greater than +0.75°C.

The participation of Clouds in the Greenhouse effect is not well understood but can only diminish the postulated warming effect of added Man-made CO2. 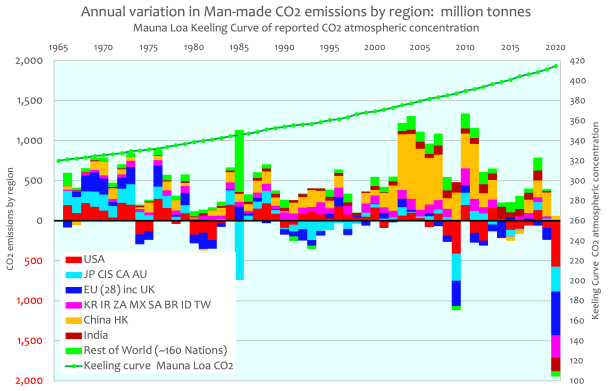 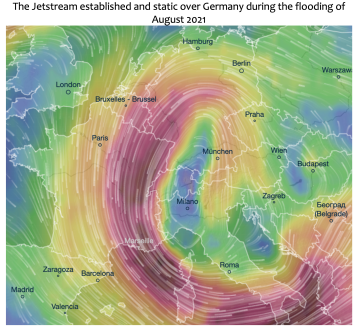 The consequential low temperature insertions across Russia and North America but with simultaneous warmth in Alaska.

Such extreme and apparently exceptional jet stream events are set to continue for as long as the period of reduced Solar activity persists.

The main mechanism, so far, has been the mandating of “Renewable Energy”, using Weather-Dependent Solar and Wind technologies for power generation.  These forms of power generation, installed over the last 20 years are:

The average achieved productivity / capacity percentage across the EU is shown below.

However from April 2021 to September 2021 combined Wind productivity / capacity percentage fell below 20% and even reached as low as 12% throughout July 2021.

This was compensated for somewhat by the intermittent input from solar power, which reached 15% in the summer months.

Nonetheless the combined Renewables productivity capacity % remained around 15% for the whole of the summer in 2021.

The graphs above only addresses the ineffectiveness and the comparative costs of the primary “Weather-Dependent Renewable Energy” technologies, Wind power and Solar PV power.

There are other more onerous, less effective and more costly courses of action being proposed or implemented, such as:

to ineffectively “save the world” from Man-made CO2 emissions.

The estimates in the post above show the true scale of the fiscal damage and also the real failures to curtail actual CO2 emissions achieved by the obsessions of “GREEN THINKING” by:

Green Policies:  the self-destruction of the West

There is now an absolute but erroneous conviction amongst the Governments of Western Nations that the only way to tackle their belief in :

is to eliminate Man-made CO2 emissions, particularly in the West, and to fruitlessly expect other less privileged Nations, still with massive developmental demands, to join in:

the concept of Net Zero.

GREEN THINKING has caused Western Governments, particularly in the European Union , the UK, Germany and now in the USA, to ignore their absolute priority to ensure stable, continuous and cost-effective power supplies for their populations.

Western Governments having bought into the GREEN THINKING that Catastrophic Man-made Global Warming is an immediate and existential Global threat that they, even when faced with simple but devastatingly and clearly wasteful calculations, are nonetheless still dismissive and assume a position of:

“wilful ignorance” and a stance of “don’t confuse me with facts, we are saving the world”.

An excellent way to undermine Western economies has been to render their power generation unreliable and expensive.

That objective of GREEN THINKING is progressively being achieved by Government policy but with no popular mandate throughout the Western world.

It is patently clear that Western actions in isolation can never save the World from the Climate Change, if it ever needed saving, but these actions can do untold fruitless self-harm to Western economies and populations.

The true beneficiaries of Western GREEN THINKING are Russia and China:  they are obviously unconcerned about the Western belief in an overheating Climate and are mocking the self-harming actions of their Western adversaries.

Russia, in particular, has done much to promote the idea of the Global Warming catastrophe in the West by financially encouraging the propaganda of “Western environmental NGOs”, this actual aggression is well understood and acknowledged  by NATO.

As a result China and Russia are gaining ever more destructive control over Western Nations and Society.

So, spending any effort, for emotional reasons and in the quasi-religious belief in the evil of Western Man-made CO2 emissions:

Trying to stop the UK’s 1.0% or the EU’s 8.6% of something that has actually not been happening for 3 millennia has to be monumentally ill-considered.

Green Thinking has made it impossible for Western politicians to carry out the wise and financially prudent energy policies by admitting that:

Prudent Climate policies would be to:

“Motivated by the precautionary principle to avoid dangerous anthropogenic climate change, attempts to modify the climate through reducing CO2 emissions may turn out to be futile. The stagnation in greenhouse warming observed over the past 15+ years demonstrates that CO2 is not a control knob on climate variability on decadal time scales.”

These  quotes could be paraphrased as:

“doing nothing for the next fifty years is a much better option than any active political measures to control climate.”