To demonstrate the Futility of Western thinking in unilaterally trying to reduce its Man-made CO2 emissions, this post follows the thinking of the late Professor Sir David Mackay, using “some simple speculative back of the envelope calculations”.

This point was amply made by Berkley Professor Richard Muller in 2010.  His graph below and anticipates rather faster CO2 emissions growth from the developing world, than either of the scenarios here.  It shows the extent that the Underdeveloped world is set to wholly overwhelm any efforts in the West to reduce Global CO2 emissions and thus attempt to influence Global temperature. 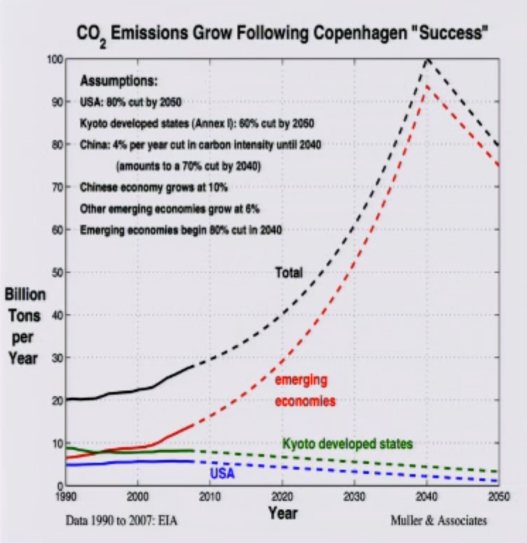 As Professor Richard Lindzen said at a UK parliamentary hearing in 2014:

Two future scenarios are considered but with no timescales are defined.  They simply set the range of outcomes:

These values give a reasonable range of estimates and show how the inevitable CO2 emissions growth in the Developing World would entirely negate and swamp any CO2 reductions made by Western nations, however draconian, in the name of controlling Global climate.

Starting point from 2020 with the COVID effect

BP releases its review of World Energy every year and their most recent CO2 emissions data was released for the end of 2020.  This data takes into account the COVID effect during 2020.  However the COVID effect has meant that in 2020 overall:

This data set is used as the foundation of the following speculative calculations.

This post uses the current 2020 CO2 emissions status as provided in current BP (British Petroleum) dataset, accounting in part for the COVID effect.  The comprehensive BP data is reclassified into major Nation groups as shown below:

The 2020 progress of CO2 emissions shown as current tonnes/ head according to the BP data is set out below.

In spite of the 2016 Paris Climate accord and all other International CO2 reduction efforts, the Underdeveloped and Developing Nations have no significant limitation of their CO2 emissions for the foreseeable future. 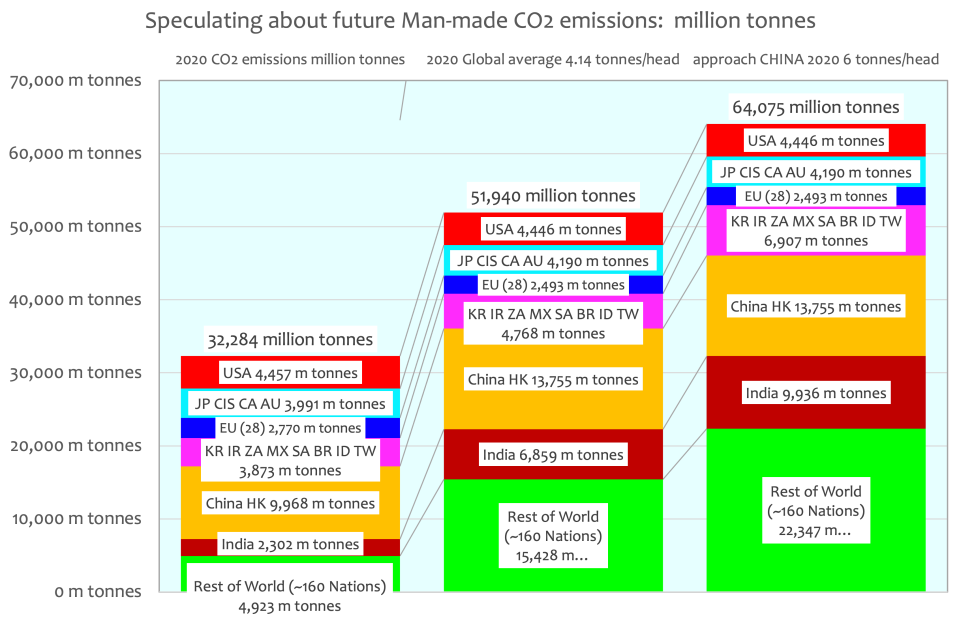 Western agencies, such as the UN and IMF, are trying to hold back investment for effective power generation in the Underdeveloped World, (about 54% of the Global population), on the grounds of controlling Man-made Climate Change.

On the other hand, the Chinese “Belt and Road Programme” is working in exactly the opposite direction.  China is promoting Coal-fired power and the installation of electrical grids throughout the Underdeveloped World.  The likely future outcomes in terms of CO2 emissions of this Chinese policy may well be indicated by these speculative estimates.

The improvements in lifestyle for the Underdeveloped world will progressively reduce the pressure for further population growth in those Nations.  The concomitant beneficial outcome for China is the eventual technical and financial colonisation of much of the Underdeveloped World.

The USA on the other hand with the COVID effect has already achieved substantial CO2 emissions reduction, about -32% ~1,500 million tonnes/annum since 2000 by the use of Fracked Gas rather than Coal for electricity generation.  This technical shift has already resulted a far greater CO2 emissions reduction than could have been achieved by either the Kyoto Protocol or the Paris Climate Accord.  The USA’s continuing replacement of Coal-firing by relatively inexpensive Fracked gas for electricity generation is assumed to effect a further 15% reduction in USA CO2 emissions.

The only Nations making any real, proactive efforts to reduce their CO2 emissions are in Europe, Australia and Canada.  And more recently possibly under the Biden administration the USA.  The aspiration to get to “Net Zero CO2 emissions” cannot be achieved without the destruction Western economies and the total loss of wellbeing in Europe and the West.  It should also be noted that the reduction of CO2 emissions/head/annum down to ~5.4 tonnes/head in the UK was largely attributable to the earlier UK “dash for Gas” policy, whereas the German “die Energiewende” policy  and even with its massive commitment to Weather Dependent Renewables has not resulted in an equivalent CO2 emissions reduction, save for the COVID effect.

The proportional percentage breakdown of these CO2 emissions growth scenarios is shown below.

An estimation of Global Population Growth 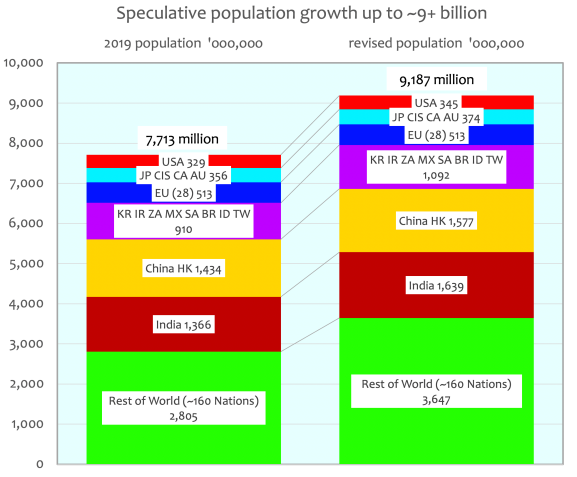 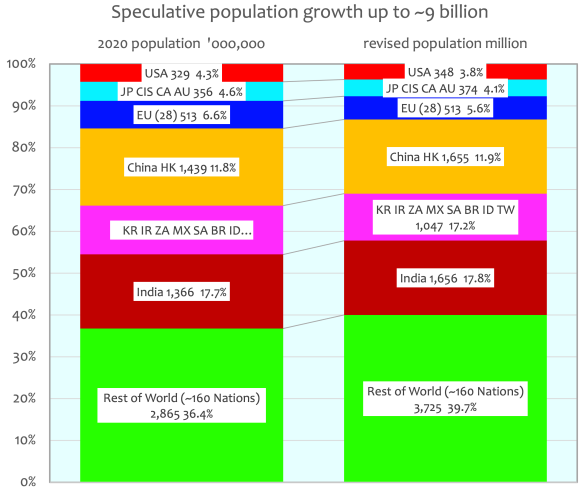 The environmental context for concerns about atmospheric CO2

Any CO2 reduction policy should also be seen in a longer-term context.

But, the prospect of even moving in a cooling direction is something to be truly concerned about both for the biosphere and for the survival of man-kind.

However as soon as the Underdeveloped world gets access to centralised power that potentially viable 20% reduction for the EU(28) at 550 million tonnes/annum would be entirely swamped by the inevitable additional CO2 emissions elsewhere in the World.

From past experience neither significant CO2 emissions reductions nor massive excessive annual production seem to have made any perceptible reaction or forced inflexion to the Mauna Loa Keeling curve over the past 55 years.

The unchanging progress of the Mauna Loa Keeling curve implies that all concerns over the control of Man-made CO2 emissions particularly from the Western world are unwarranted and unjustifiable.

In the context of the inevitable and massive future expansion of CO2 emissions from the Underdeveloped world, any CO2 reduction efforts in the West, the EU(28) or just in the UK alone would simply be acts of massive economic self-harm and clearly futile.  Even doubling Man-made CO2 emissions, (from the developing world), as anticipated by these scenarios is unlikely to cause any significant perturbation of the Keeling curve.

The irrelevance of further Man-made CO2 emissions towards modifying Global temperature is demonstrated in the following post:

An excellent way to undermine Western economies is to render their power generation unreliable and expensive.  That objective of Green thinking is progressively being achieved by Government policy but without popular voter mandate throughout the Western world.

So, spending any effort, for solely emotional and in the quasi-religious belief in the evil of Western Man-made CO2 emissions:

let alone at GDP scale costs, trying to stop the UK’s 1.0% or the EU’s 8.6% of something that has not been happening for 3 millennia has to be monumentally ill-considered and ill-advised.

Unsurprisingly, Russia, China and India are mocking the way Western governments have been induced by their “Green thinking and Virtue Signalling” to promote their policies of abject self-harm at great National cost and to no perceptible benefit.  This is amply supported by Western “useful idiots”, (Lenin’s term).

The “Green” movement has already succeeded in eliminating Fracking throughout Europe and Germany now has a dependency on Russian Gas exports via the Nordstream pipelines, which can be cut off any time at Russia’s whim.

The Developing and Eastern worlds are certainly not going to be meekly following the deranged example of the “virtue signalling” West.