The Industrial Revolution and the exploitation of fossil fuels has provided and can still provide an ample supply of abundant energy for Mankind.  Fossil fuels have advanced the quality of life and the prosperity particularly of the Western world over the past 2 centuries.  There remains a very large proportion of the Global population who are yet to see similar benefits and advances in their wellbeing.

Nonetheless, in spite of the rapid growth in the Global population there has still been a progressive advance of the well-being of Man-kind with the reduction of poverty levels and climate related losses worldwide.

Green Thinking is now a major obstruction to the availability of abundant energy worldwide.  Western Nations try to demonstrate their “Virtue” by demonising Carbon Dioxide CO2, the essential Gas upon which all life depends, tackling their idea of a Climate emergency by promoting the concept of    “Net Zero“.

Green Thinking: a contradiction in terms and the induced self-destruction of the West

This post provides illustrated comparisons between these power generation technologies from the following points of view:

This posts collates, summarises and illustrates the performance characteristics of the different power generation technologies in a unified format.

There are continual assertions that Weather-Dependent power generation technologies have become cheap and cost effective.  But such assertions take no account of:

The long-term recorded Weather-Dependent “Renewables” productivity over the last decade in Europe is show below.

Conventional Generation is shown here at to its full potential 90% achievable when not encumbered by any political interference to promote, subsidise and support Weather-Dependent “Renewables”.

Would anyone sane buy a car costing 5 – 10 times the normal price that only works one day in five, when you never know which day that might be ?  And then insist that its technology is used to power the whole economy.

The abundance of available energy is the source of Man-kind’s advancement in wellbeing for the last 200 years, the greater the excess the better.  Any power generation technology must return more energy to the system than it takes for its implementation and then a great deal more to be truly viable.

ERoEI is the ratio of the Energy output over Energy expanded to create and maintain the generation technology.  The diagram below shows the levels of excess energy required to support civilisation.  It is generally accepted that any ERoEI ratio for a particular power generation technology less than 7 is an insufficient excess to maintain the minimum wellbeing of Mankind.  The greater the ERoEI ratio value above the economic threshold of 7 the better for the provision of abundant useful Energy for the benefit of Man-kind. 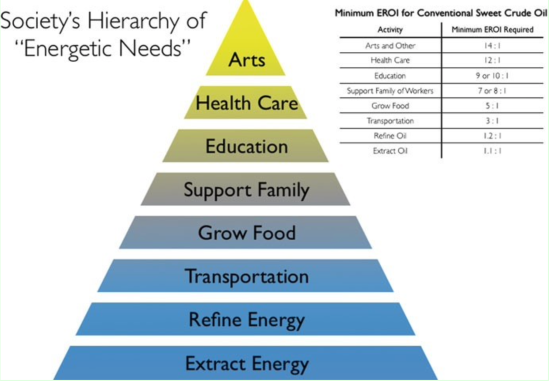 Conventional generators have no need for costly energy storage:  their back-up energy storage, (battery),  is in their stockpiles of fuel on site or immediately available.

Note:  1 kilogram of Coal contains ~40 times more energy than 1 kilogram of a Tesla powerwall battery, which costs ~330 times more/kilogram.  In other words Coal is 13,000 more cost effective for energy storage than the most advanced batteries.

In effect these ERoEI results indicate that, even if cost effective storage were available, neither Weather-Dependent generators nor imported Biomass can ever produce sufficient consistent and useful excess power to support civilisation.

Thus, all Weather-Dependent “Renewables” generation and Biomass are parasitic on other sources of power for their manufacture, installation and maintenance.  As they are increasingly imposed upon a functioning power grid they increase the likelihood of Grid failure.

Without accounting for storage to cover the unreliability and intermittency of Wind power both Onshore and Offshore may exceed the economic threshold, (ERoEI ~7), on occasions but because of their unreliability an non-dispatchabilty they are still ineffective when compared with Conventional 24/7 generation technologies. 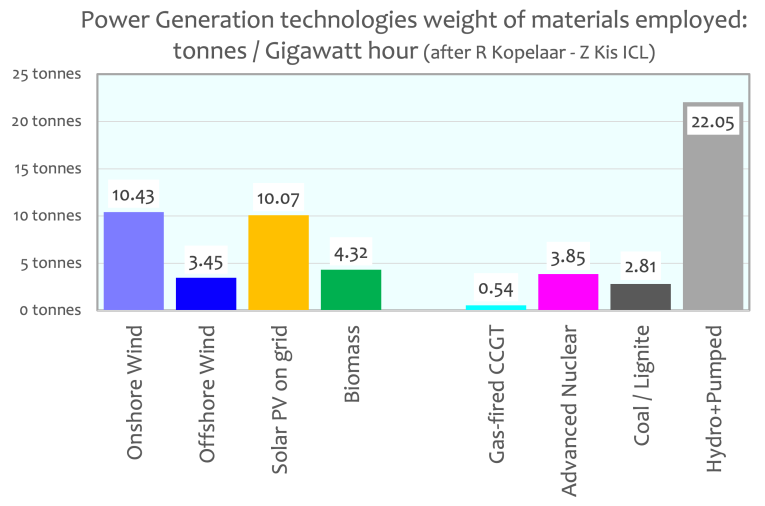 The weight of the material involved in the installation of generation technologies gives an indication of the necessary scale of engineering enterprise they require.  The bulk of the materials involved are mainly concrete and steel but with significant and growing requirement for rarer and more costly elements. 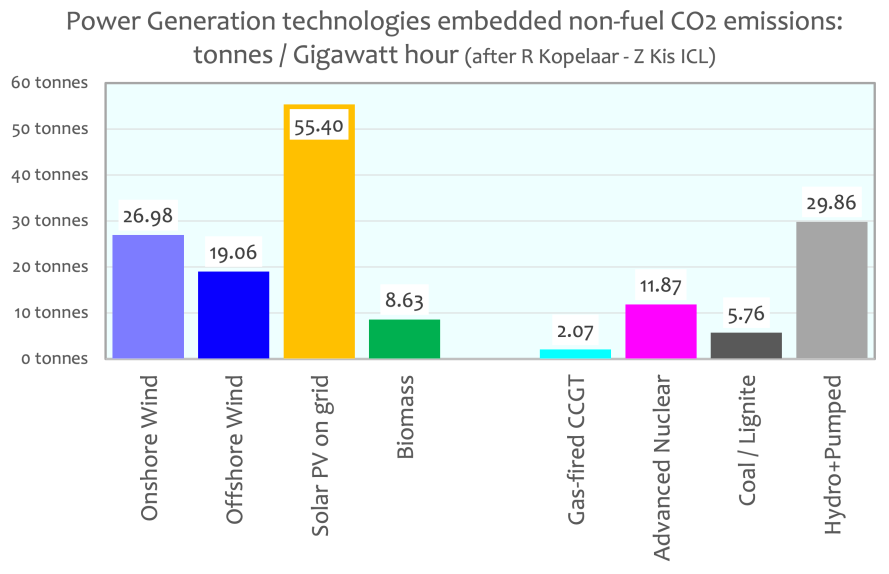 For reference this diagram shows the comparative CO2 emissions for power generation technologies.

Land Use requirements for Power generation 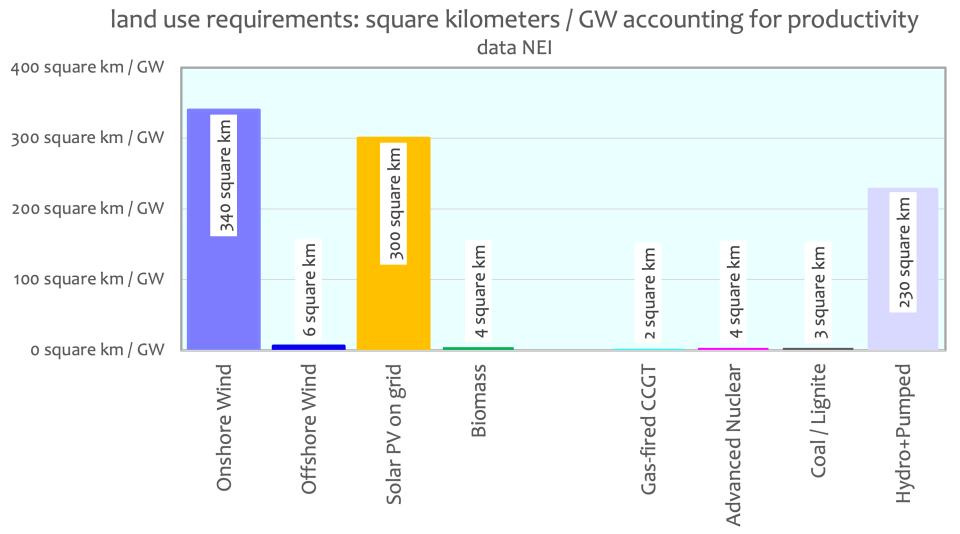 All conventional power generators and Biomass have modest land use requirements, a few square km / GW at the point of generation.

The 2022 US  EIA table below is used to give indications of comparative power generation costs.

US $ are used through these analyses for comparative purposes.  The comparison of US  EIA overnight for the capital costs for different generation technologies is shown below.

The interpretation of the US  EIA data results in the following abbreviated table:

The comparative costs for contributing  the equivalent of 1Gigawatt in capital and in the 40 year long-term at USA fuel prices for are shown below. 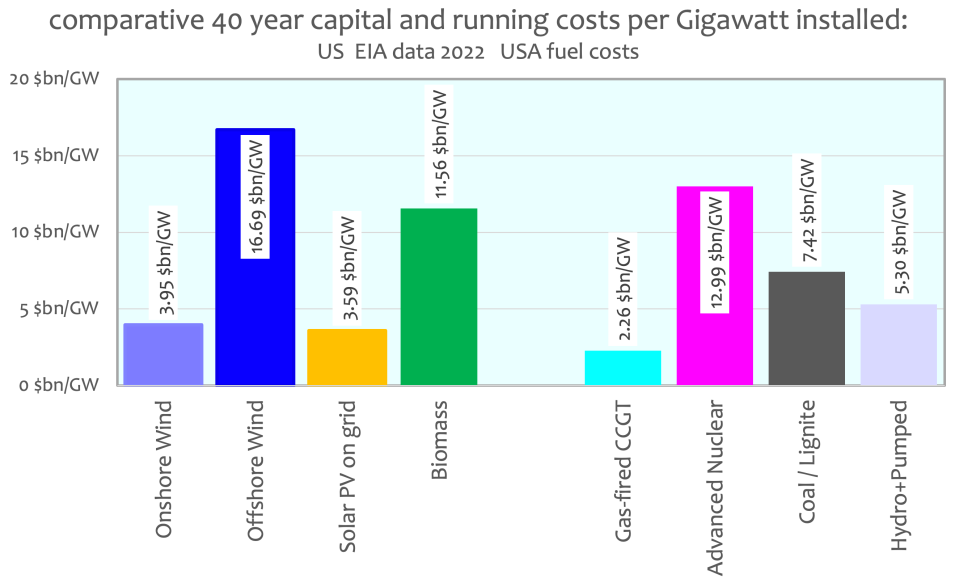 The long-term costs estimated here also account for the limited service life that is achieved with Weather-Dependent “Renewables”.  At 18 – 25 years as opposed the 60 years plus for Nuclear power it is much shorter than achieved by other Conventional Coal-fired or Gas-fired generators.  To give conservative comparisons with Weather-Dependent “Renewables” 40 year service lives are used in this costing model.

To assess the true comparative cost of  delivering a GW unit of power to the grid the actual productivity of of the generation technology has to be taken into  account.  The productivity record of Weather-Dependent “Renewables” in Europe for the last decade is is taken as the yardstick. 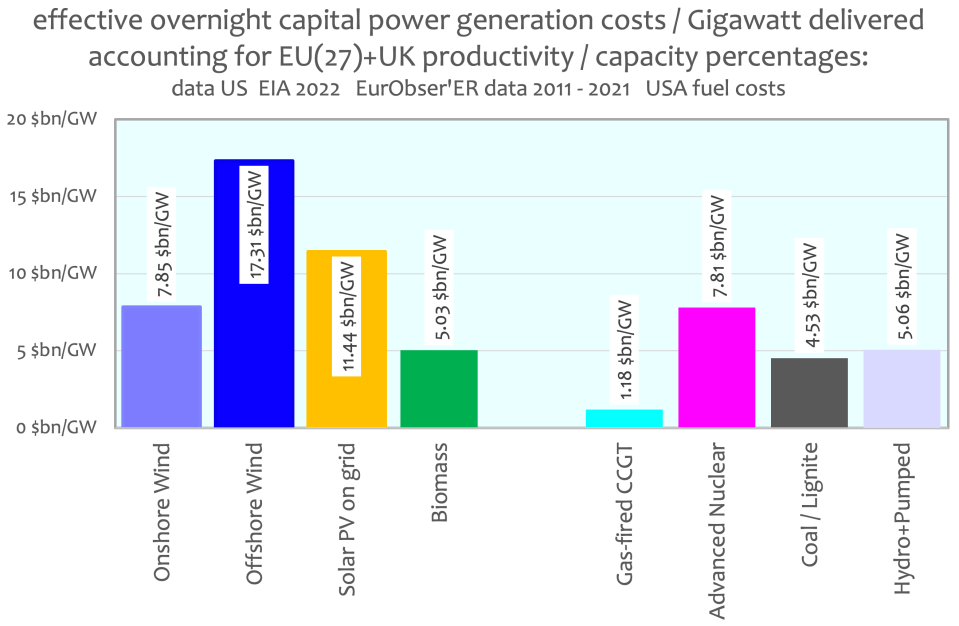 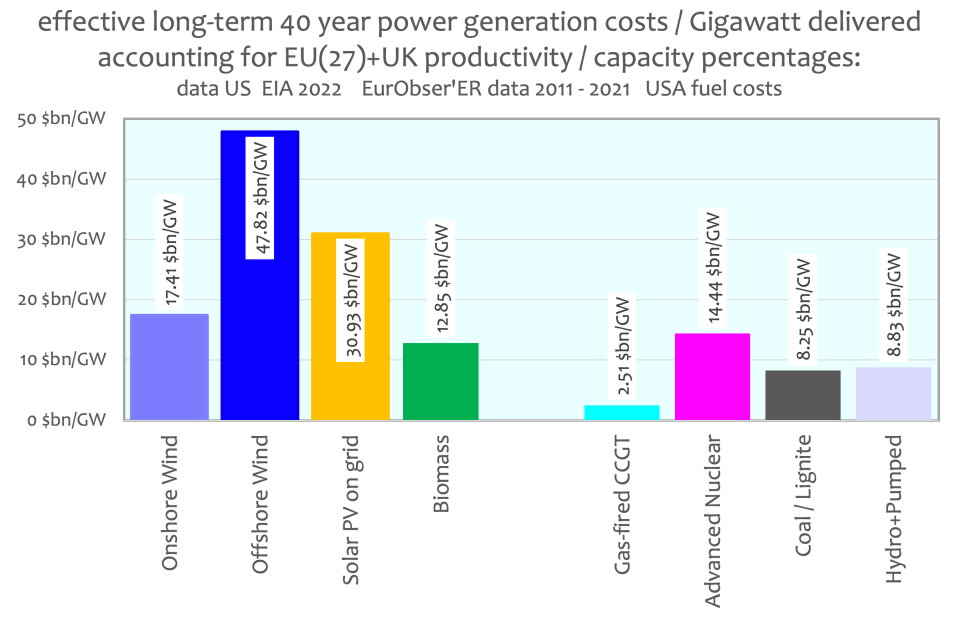 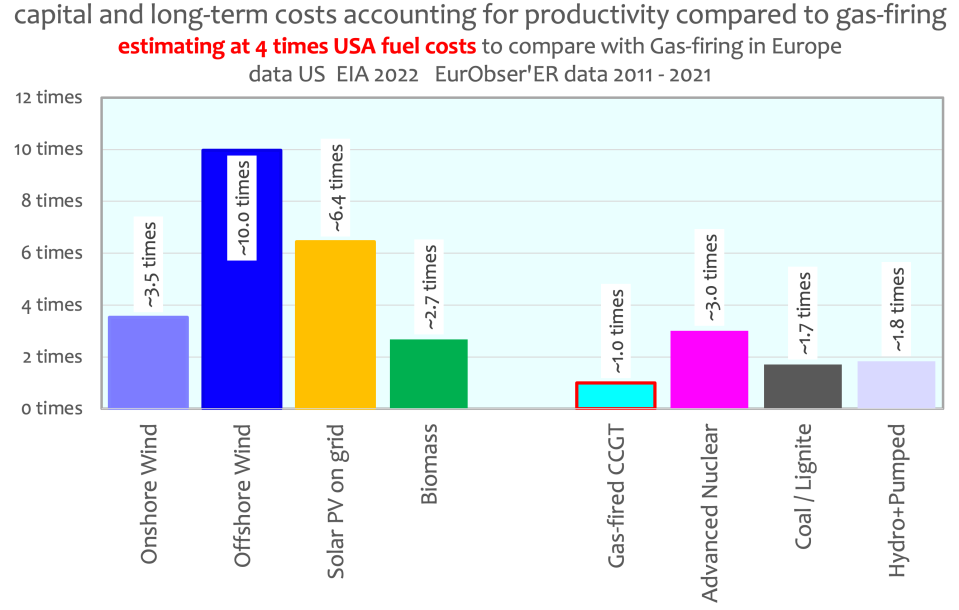 An estimate of the scale of the excess costs over using Gas-firing in stead of Weather-Dependent “Renewables” incurred across Europe is shown below.  This summarises the adverse fiscal achievement of the Green movements across Europe which have managed to block Fracking for indigenously available Natural Gas.

The two main means of actually reducing CO2 emissions from Power generation are replacing Coal-firing by Gas-firing and by the use of Nuclear power.

The use of Gas-firing to provide the same level of power to the Grid is generally much cheaper the any Weather-Dependent generation or Biomass.  In capital cost terms Solar power is only marginally dearer for the equivalent Nameplate capacity, whereas Onshore wind power is only about twice the cost to install.

It is only when their actual productivity contributing power to the grid that true cost comparisons of the power supplied to the Grid can be made: these are summarised below.  Taking into account productivity the installation of:

Any assertion that “Renewables” are reaching cost parity with conventional power generation is patently false.

These comparative values show how the irrational political obsession with nominally reducing CO2 emissions, (UK at ~1% – Europe ~10% of Global CO2 emissions), increases both the costs and reliability of power generation for the Nation.

An installed European fleet of ~400GW Weather-Dependent “Renewables” had a capital cost of ~600 $billion.  Had a 600 $billion investment been made in Conventional power generation those installations would have been sufficient to replace the whole of the generation capability of Europe with reliable 24/7 Conventional power.  Instead the obsession with Green thinking at a productivity percentage of only ~20% has actually only contributed the equivalent of ~70 GW (~17%) of power input to the European Grid.

Realistically this result should be considered to be the outcome of the continuing Cold War against Western capitalism.

These points can be summarised as follows:

It is to be hoped that the development of Small Modular Reactors, (SMR), using current fission technologies will in due course mean that Nuclear power can become much cheaper to install and more widely employed.  Fission power as an power source will become increasingly important, as Fossil fuels eventually become progressively depleted.

However, Fossil Fuel resources, if not maligned and negated by Climate Change alarmism, would be able to provide effective power and power for the developing and Western worlds for several generations with Coal use at ever increasing levels.

As conventional generation installations become underused by Green policy, they have become unprofitable and thus either require subsidy support to maintain their operation and sustain Grid viability or are subject to closure.  Such closures seem to be a short-sighted but intended consequence of the Energy policies of Western Governments.

As such those policies are rendering the power supplies in Western nations more and more vulnerable.  That process of making power generation ever more unreliable, poses a real and existential danger to Western societies.  The immediate damage from the danger of loss of power supplies for Western societies is far in excess of any possible risk from putative but irrelevant Man-made Global Warming far in the future.