What if there is no Catastrophic Risk from Man-made Global Warming ?

What if Man-made CO2 emissions are not the “Climate Control Knob” ?

What if Man-made CO2 emissions really are a non-problem ?

But what if there is a real Global Cooling Catastrophe in the offing ?

It is the propaganda of Catastrophic Global Warming / Climate Change alarmists that has illogically conflated Carbon Dioxide, the beneficial trace gas that sustains all life on earth and which may cause some minor warming, with real and dangerous pollutants to create the “Great Global Warming Scare / Climate Change Scare / Climate Emergency / etcetera”, with their “we are all going to fry in the next few years” narrative”.

The temperature progression of Greenland Ice Cores, (during the Holocene interglacial above), shows that each high point in the past of our current benign epoch:

has been colder than its previous high point.

For the last 3 millennia, since 1000BC, cooling has been progressing at a rate considerably higher than during the earlier Holocene that encompassed the highest temperature of the Holocene Climate Optimum.

As the Holocene epoch is now some ~11,000 years old, experience of previous interglacials shows that it should be ending very soon, in geological time.  It is therefore much more likely that the Holocene will continue to cool at at least its current rate as it has done for the past 3 millennia, unless it terminates suddenly like earlier interglacials.

As a result of the failure to appreciate elementary arithmetic,  physics and biology, the Western world is being forced to indulge in a massive guilt trip, with endless predictions of impending global catastrophes.  But instead it is likely that modern Holocene warming just at the end of the 20th century global warming is:

The probability is that any current global warming is not man-made and in any case it could be not be influenced by any remedial action, however drastic, taken by a comparatively small part of the Global population, Western capitalistic democracies.

That prospect should be greeted with unmitigated joy.

The role of Atmospheric CO2

Apart from accepting and emphasising the the role of water vapour and clouds in the “Greenhouse Effect” these notes use conventional Intergovernmental Panel on Climate Change, (IPCC), wisdom to calculate the temperature effect of CO2.  Any realistic climate policy should be based on the following points on recognising the role of natural atmospheric CO2 and Man-made CO2 emissions:

CO2 concentrations came close to the fatally low level, (~150 ppmv), during the last ice age, 110,000BC – 10,000BC.  That dangerously low level of atmospheric CO2 could well be exceeded in any coming Ice Age.  Colder oceans absorb more CO2 and ocean life sequesters it as limestone.

This is the way our world will eventually die of atmospheric CO2 starvation in a future glacial period.

Increasing CO2 concentration, mainly arising from slightly warmer oceans outgassing CO2, has been promoting plant growth throughout the planet and has been reducing the water needs of plants.  According to NASA, ~15% extra green growth across the planet is already attributable to the relatively recent increase in CO2 concentration. 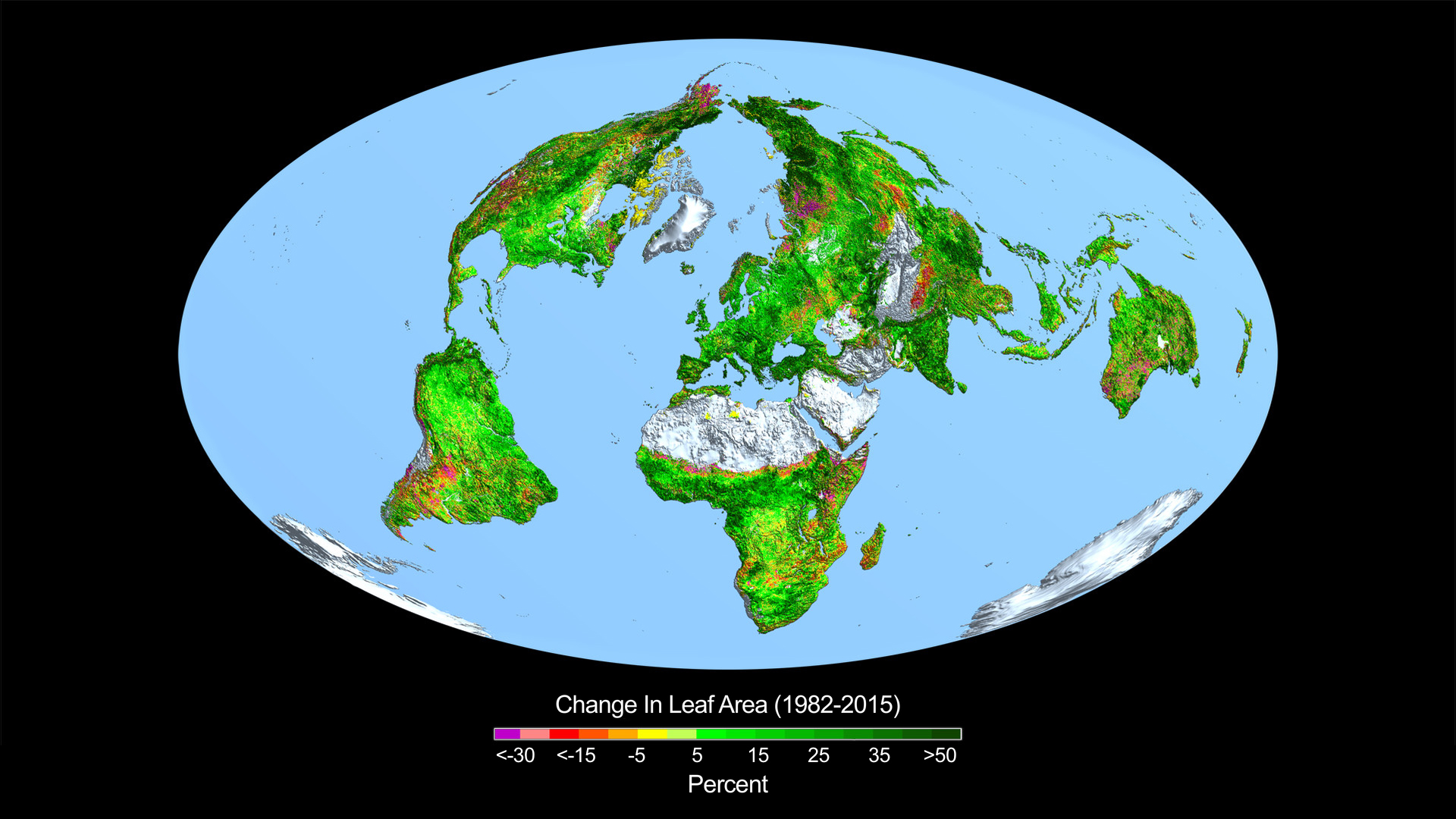 Man-kind as a whole contributes only a small amount of the CO2 in the Carbon cycle, (~3% per annum), and any extra atmospheric CO2 is rapidly absorbed by the oceans and the biosphere, (with a half-life probably as short as ~5 years).

Atmospheric CO2, whether Man-made or mostly naturally occurring, cannot therefore be considered as a pollutant.  If any extra CO2 were to have some minor warming effect, it would be all to the good.

However added CO2 from Mankind’s use of fossil fuels is unlikely to be sufficient to avoid the adverse cooling effects of the soon to be ending Holocene interglacial.

In spite of the hysterical propaganda, there is no direct straight-line relationship between CO2 concentration and global temperature.

In spite of the propaganda atmospheric CO2 concentration is not a direct control knob on Global temperature.

The effectiveness of CO2 as a warming Greenhouse gas has rapidly diminished logarithmically as its concentration increases.  The consequence of this logarithmic diminution mean that all further CO2 induced temperature increases can now only be absolutely marginal and that there is no chance of any further Catastrophic Global warming, whether effected by Man-kind or not.

In other words there cannot be “an enormous Climate Emergency” caused by further increases in the level of Man-made CO2.

This logarithmic diminution effect is caused by the overlapping energy wavelengths between greenhouse gasses and water vapour in the atmosphere.  As a result at the current level of CO2 concentration in the atmosphere at ~400 ppmv, the effect of CO2 as a Greenhouse gas is close to being fully saturated.

An analogy of the CO2 diminution effect with increasing concentrations, can be imagined as if one was painting over a window with successive layers of white paint.  The first layer will still be fairly translucent, but subsequent layers will progressively reduce the translucency until the window is fully obscured and thereafter any further paint layers can make no further difference to the fact that the window is already fully obscured.

A concentration of atmospheric CO2 greater than 200 ppmv, equivalent to ~77% of CO2’s Greenhouse effectiveness, is essential to maintain plant life and thus all life on earth.  Plant life will be extinguished with CO2 levels at ~150ppmv.

CO2 is not causing global warming

There is now so little of the potential of CO2 as a greenhouse gas now remaining that there is no possibility of ever reaching the “much feared” +2°C temperature rise or more predicted by alarmists.

There is a range of scientific views on the significance of atmospheric Water on the Greenhouse effect ranging from 98% – 75%.  The further residual CO2 warming available across this range of cases up to a concentration of 1000 ppmv, some 2.5 times the present CO2 concentration.

From now on increasing CO2 in the atmosphere can only lead to very limited further warming and certainly not to any catastrophic and any dangerous temperature increase.at ow.

Alarmists have stated that levels of +2.0°C – +1.5°C to be catastrophic and sadly they have convinced most of the Western world’s politicians.  It has since been admitted, via the Climategate release of emails, by the alarmist scientists at the University of East Anglia that the value of +2°C was simply “pulled from the air”.

Economically any increase up-to a further +2°C would be beneficial.  Global temperatures would then approach the very abundant period of the previous Eemian interglacial epoch 110,000 years ago, when hippopotami thrived in the Rhine delta.

It is now likely that the impact of any rise in CO2 concentrations on global temperature is not only marginally insignificant but also immeasurable, even at its greatest IPCC assessed effectiveness.  In fact any temperature rise could well be beneficial.

The future of Man-made CO2 emissions

To bring India and the Developing world, (some 4.1 billion people, ~44% of the world population), up to the current level of development of China, as represented by its  present level of CO2 emissions/head, over the coming decades their CO2 emissions are bound to escalate by at least a further 20 billion tonnes per annum, (+~60%).  This inevitable increase in CO2 emissions is being promoted and supported by the Chinese “Belt and Road programme” with at least 700 new Coal-fired power stations in construction or in now the pipeline.

So faced with this inevitable escalation, the political belief of Western Nations that they are able to limit Global temperature by the elimination of their own relatively small proportion of CO2 emissions from their own use of fossil fuels can now only ever have marginal, immeasurable and entirely self-harming effects.

Therefore, any de-carbonisation efforts by Western Nations are misguided and irrelevant.

Fossil fuels are a gift of nature.  They are like a battery of energy created by sunlight several million years ago.  Their use has enabled all the civilised development in the West world and will continue to support the growth in prosperity of the Developing world.  Fossil fuels are not running out.  Fracking developments can occur almost anywhere worldwide.  For example there are 300 years’ worth of Coal in the UK alone.

Nonetheless there is a real Climate Catastrophe in the offing

That coming catastrophe is the exact opposite of the Climate alarmists “we are all going to fry in twelve years narrative”.  It presages a very scary future for Man-kind and the biosphere and it may well in part arrive in the comparatively near-term:

How The Sun Affects Temperatures On Earth

The Real Climate Crisis Is Not Global Warming, It Is Cooling, And It May Have Already Started

And so trying to limit the “warming effect” of Man-made CO2 emissions in the Western world will do nothing to ameliorate a coming Cold Climate Catastrophe.  Any “Climate Action”, if effective at all, could only enhance the cooling effect that has already been evident for the last 3 millennia.

There is no Man-made Global Warming Climate Emergency.

“There is no climate emergency”

Spending any effort, for solely emotional and childish reasons, without:

trying to stop the UK’s 1% / the EU’s 10% or the capitalistic West’s ~30% of something that has not been happening for 3,000 years has to be monumentally ill-advised.

It should be understood that the real reason for “Green” thinking is to bring Energy and Economic catastrophe to the capitalist Western world.

Green thinking and its induced policies should be regarded as a continuation of the “Cold War”.

“Unlike most conspiracy theories about Russian meddling in Western politics, this one is out there in plain sight. The head of NATO, Anders Fogh Rasmussen, said the Russians, as part of a sophisticated disinformation operation, “engaged actively with so-called non-governmental organisations — environmental organisations working against shale gas — to maintain Europe’s dependence on imported Russian gas”.

The Centre for European Studies found that the Russian government has invested $95 million in NGOs campaigning against shale gas. ….. The US Director of National Intelligence stated that “RT runs anti-fracking programming … reflective of the Russian Government’s concern about the impact of fracking and US natural gas production on the global energy market and the potential challenges to Gazprom’s profitability.”

Russia, China and India are mocking the way Western governments have been induced by their “Green thinking and Virtue Signalling” to promote their policies of abject self-harm at great national cost and to no perceptible benefit.  This is supported by Western “useful idiots”, (Lenin’s term).  Lenin rightly held them in utter contempt.

The developing and Eastern worlds are certainly not going to be meekly following the deranged example of the “virtue signalling” West.