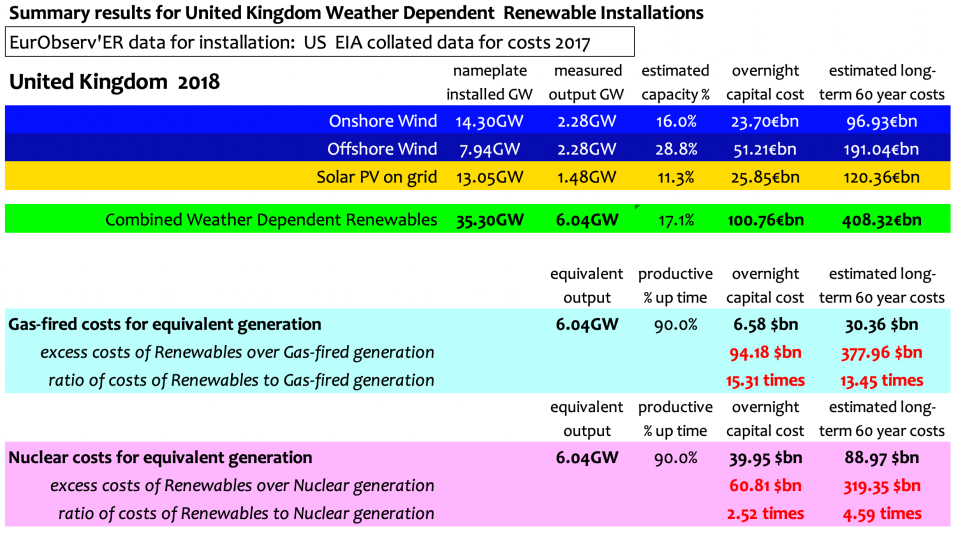 This post gives indicative, (back of the envelope), estimates of the net capital and net 60 year long-term costs of Weather Dependent Renewables as compared to the use of Gas-firing for electricity generation in the UK.  These net calculations avoid the market distortions arising from the political interventions supporting Renewables.

The introductory table above shows that the indicative overnight capital costs of the current UK Renewable fleet is ~100€bn and the anticipated further long-term costs would be ~400€bn, were those existing Renewables to be maintained long-term.

They give an idea of the present scale of the bare costs for “Green virtue signalling” in the UK.  These costs fall both on the UK taxpayers and the UK electricity consumers.  The equivalent costs using Gas-fired to provide a similar level of continuous power generation would be ~6€bn  in capital costs and a further ~23€bn long-term respectively.

In the UK the three main forms of UK Weather Dependent Renewable Energy are Wind Power, (Onshore and Offshore), and on grid Photovoltaic Solar Power, about 75% of the total.  The other “Renewable” energy inputs include traditional Hydro power ~8% and the remainder are other sources such as biomass, waste and landfill gas amounting to ~17%.

In 2017 the UK represented only 1.2% of the global CO2 emissions and power generation only accounted for less than one third of those CO2 emissions, transport and space heating accounting for the remainder.

So making costly modifications UK electrical  generation technologies can only have a marginal and minor impact on a very small proportion of current global CO2 emissions.  That impact is even less if one questions the CO2 emission footprints of Renewable technologies from manufacture to demolition.

Whenever announcements are made about Weather Dependent Renewable Energy installations, they are reported as the full Name Plate rating, (in other words the maximum potential power output the installation can produce under ideal Weather conditions), and also disingenuously as the number of homes that could be supplied at their full level of power output.  The question of Capacity  /  Load Factors are never fully explained, so such announcements are always deceptive.   Such Renewable Energy announcements falsely assume that the wind blows all the time at productive speeds and that the sun shines overhead 24 hours /day.  It should be noted that in 2018 that the combined capacity factor of UK Renewables amounted to ~1/6th, 16.6% of their Nameplate rating.

The Renewable Energy Foundation, is a promotional organisation reporting on Renewables and Green energy in the UK.  It has provided comprehensive time series data on Renewable Installations in the UK since 2002.  This includes the Nameplate rating of installations and the annual Gigawatt Hour electrical output by each generation technology.  This post uses those data and provides graphic representations of the Renewable Energy Foundation information.

The UK progress by 2018 in the development of Weather Dependent Renewable installations since 2002 is shown below. 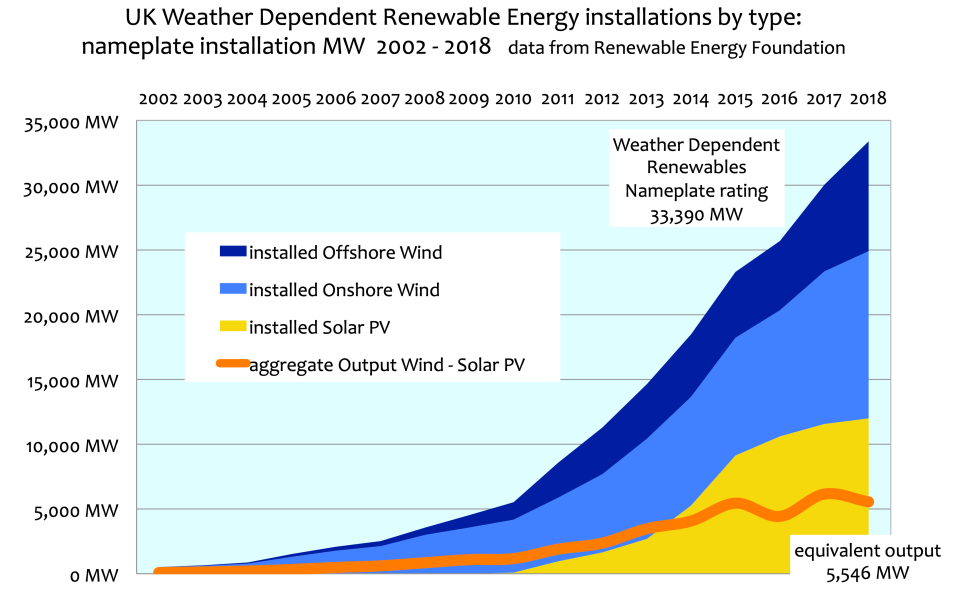 The progressive installation of Renewables since 2002 in terms of size rating and power output is shown below. 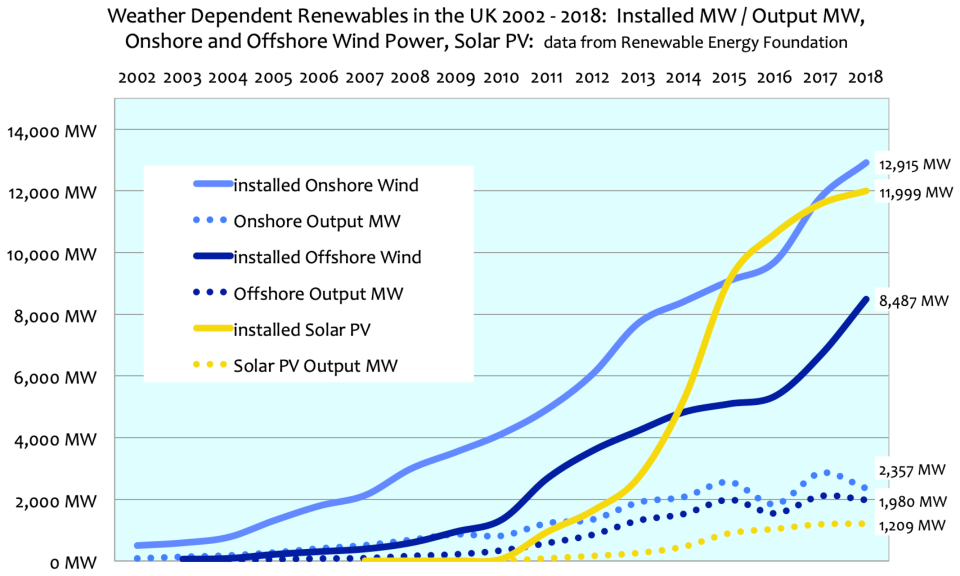 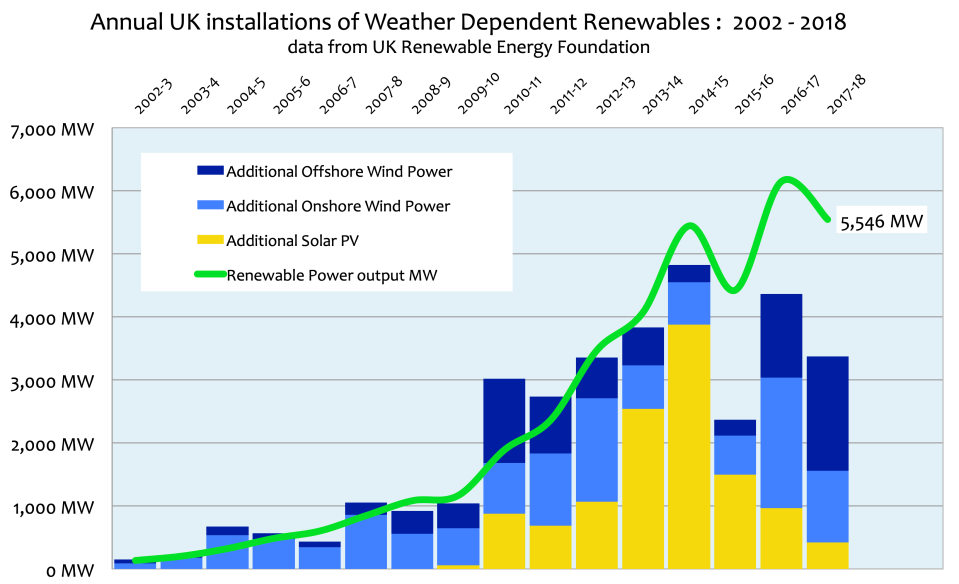 The UK has adverse cloudy weather and Northern situation.  It is thus one of the least favourable contexts for Solar power in Europe, with a consistently achieved capacity factor at only ~10%.  Solar energy can only make any worthwhile power contribution at times of low demand:  it never contributes at peak load times on winter evenings.  Nonetheless there has been an excessive commitment to Solar PV power in the UK, trebling the scale of installations in the period 2013 – 2016 and now matching the scale of Onshore Wind Power installations.

These decisions for Solar power have shown the irrational and perniciously wasteful influence of Chris Huhne and Ed Davey as the then Secretaries of State for Energy.  They were aggressively promoting Solar energy, against the better advice of their civil servants, (see Prof David Mackay).

The Renewable Energy foundation presents the power output of Renewables is presented as Gigawatt Hours (GWhrs) generated per year.

Note:  Annual Gigawatt hours are converted to an equivalent Name Plate rating in Gigawatts by dividing by the number of hours in the year (365*24) = 8760.  This output value can be compared with the original Name Plate capacity, to calculate the capacity percentage or load factor of any generating installation. 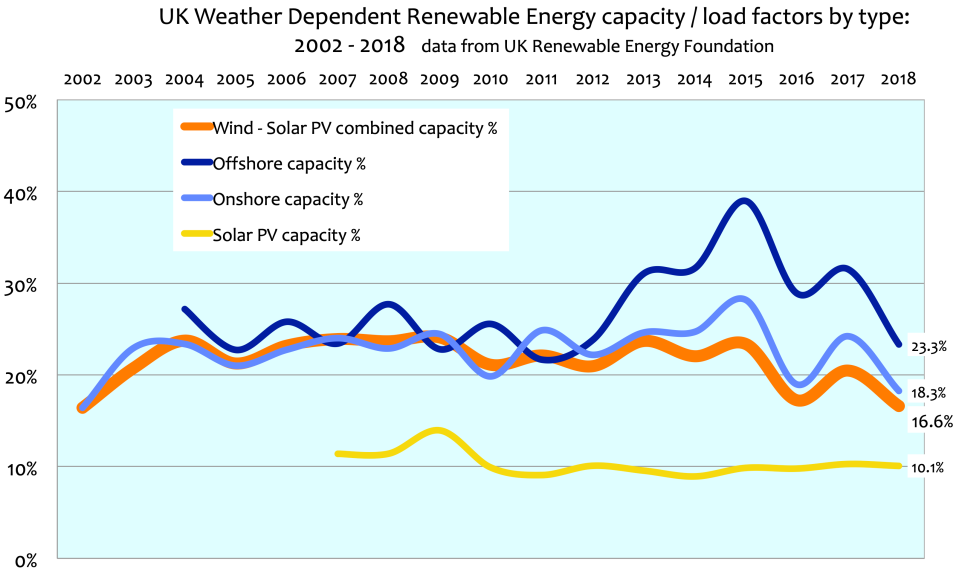 Note:   2015 was a particularly productive year for UK Wind power, especially Offshore, whereas 2016 was a poor year for wind power, and in 2017 wind power output recovered somewhat.  However by 2018 even Offshore wind power had fallen off with its capacity factor only reaching ~23%, with even poorer performance from Onshore wind power.  Thus Wind power demonstrates a large variability:  so it can never be regarded as consistent and dependable power source.  In addition the truly derisory Solar contribution to UK electrical production is clear from its consistently low capacity value ~10%.

There has been an “urban legend” that Offshore wind power has a regular capacity value of ~45%.  A level approaching 40% was achieved in the peak productive year of 2015 but this level has since fallen to ~23% in 2018, so even Offshore wind power is variable and not necessarily particularly productive.

Importantly, the measured capacity factor does not account for the usefulness of the electrical power, when it is produced to meet electrical demand, because of the inevitable random intermittency and non-dispatchability of Renewable Energy generation.

In 2018 the reported combined capacity percentage for UK Weather Dependent Renewables (Wind and Solar) in 2018 was overall ~16.6%.  Thus capacity percentage is a generous measure of performance when comparing the usefulness of the electricity generated from Renewable sources with any consistently dispatchable generation.

At 16.6% capacity overall 2018 was a particularly non-performant year for UK Weather Dependent Renewables.  As the Renewable output provides only ~16.6% of the rated installation at unpredictable times, it is essential to ensure that there is always base load power available from other generation sources to ensure that the Grid is maintained and stable.  As extra unpredictable Renewable generators are added Grid, Grid maintenance becomes ever more difficult and the risk of disruption or outages becomes ever more likely.

The US Energy Information Administration, US EIA, provides detailed cost comparisons in US$, avoiding the distorting effects of Government fiscal and subsidy policies supporting Renewable Energy.

This table of comparative US$ values has been condensed and reduced to a common costs comparator as $:€billion / Gigawatt for both capital and long-term costs, (60 years the equivalent life of a Nuclear generating installation), on the following site.

For these indicative comparisons US$ and the Euro are considered to have similar purchasing power.  Thus the resulting expression of costs for the UK in Euro billion, €bn.

It should be noted that the estimated service life used here, particularly for Wind power may be over optimistic, thus adversely affecting the cost performance of Renewable installations over their service life.

Importantly these indicative values do not account for the following additional costs that the use of Weather Dependent Renewables impose on the electricity system:

Indicative Cost Comparisons for the UK

In 2018 the level of UK Renewable installations reached a total Name plate rating of 33.4 Gigawatts providing ~5.5GW of electrical output to the grid.  That installation rating data is combined with the condensed US EIA data and summarised below.

The table above shows the combined excess capital and long-term costs over the use of Gas-firing.  In addition overall it shows that both in capital and long-term costs Weather Dependent Renewables at UK measured capacity values are about 17 times more costly than Gas-firing.  These results give an indication of the scale of cost burden imposed on UK electricity consumers by Green Virtue Signalling.  When combined with the poor measured capacity figures in 2018, Offshore wind and Solar PV may well cost close to 100€bn / gigawatt if maintained for the long-term as compared with ~4€bn/GW for Gas-firing.

The estimated annual capital expenditures on UK Renewables is shown below. This shows the extreme comparative cost burden of Offshore Wind power. 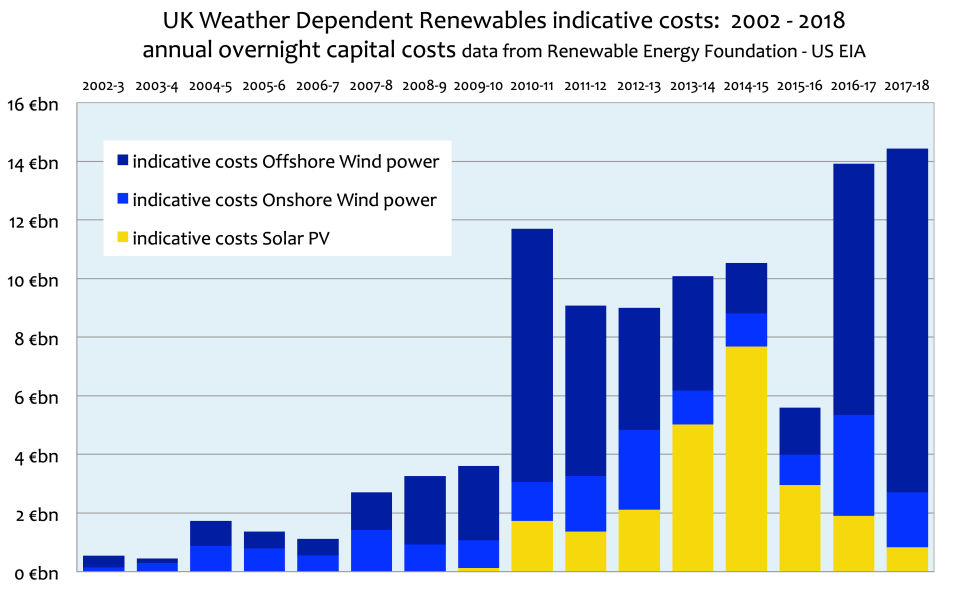 Combining the US EIA estimated cost figures combined with the current, 2018, scale of the UK Renewables fleet, the present overnight capital costs of UK Renewables is ~100€billion and that current installed fleet, if maintained, will cost ~400€billion over a 60 year service life.

The excess current capital expenditures, made in the name of Green orthodoxy, over the use of Gas-firing already expended on UK Renewables amounts to 90+€billion with a future further commitment approaching 400€billion.  Weather Dependent Renewables in the UK are 16 – 17 times more expensive than using well established Gas-firing technologies for electricity generation.

That same level of capital investment in Gas-fired generation could provide about 90 Gigawatts of generating capacity:  this is more than twice the average UK power demand and gas-fired  installations would provide full power 90% of the time.

In comparison with the EU(28) as a whole, the costs of UK Renewables are about 25% higher both because of the heavy commitment in the UK to costly Offshore wind power and also because the rapidly developed but ineffective Solar installations over the past few years.

When viewed from the needs for the engineering viability of a nation’s electrical supply, without the Green influenced, Government interference, Weather Dependent Renewable generation should never have been considered as a functional part of the electricity generating mix.  Without the Government mandates and financial subsidies the Weather Dependent Renewable Energy industry is not a viable business and at the same time Renewables impose significant extra costs on the other elements of the generation Grid and thus the clients the electrical Grid.

Inevitably the power production from Weather Dependent Renewables is un-coordinated with the timing of the actual demand for electricity.  In the UK, peak electricity demand occurs on winter evenings when Solar power is non-existent and when weather patterns can on occasions reduce wind speeds widely across the country to unproductive levels:  anticyclonic conditions often occur widely across the country, particularly in Winter.  So there can be no functional coordination between the timing to the Weather Dependent Renewable Energy production and the Nation’s demand for electricity.

Although mandated by Government in order to pursue “Green thinking” the extra costs of Renewables are in fact serious burdens on the generation industry and thus on both domestic and industrial electricity consumer.  This post makes reasonable estimates of the extent of the additional costs imposed by Weather Dependent Renewables to date.  As Weather Dependent Renewable Energy installations grow, so those cost burdens will inevitably escalate.

This paper shows that the UK policy change to promote Gas-firing over coal burning in the 1990s,  the “Dash for Gas” was co-incidentally also an effective mechanism to reduce CO2 emissions and as well as being very cost effective for electricity generation.  The continuation of that use of Gas-firing policy would have maintained low CO2 emissions in the UK even though dependent on a fossil fuel.

The Countries such as the UK and Germany that make major commitments to Solar PV and Offshore Wind end up with the most expensive installations.  Those countries like Spain that commit most to Onshore Wind power have the most economic Renewable installations.

The late Prof David Mackay (former chef scientific advisor of the Department of Energy and Climate Change) in a final interview before his untimely death in 2016 said that the concept of powering a developed country such as the UK with Weather Dependent Renewable energy was:

At the time he also said:

This post has followed through on Professor Mackay’s back of the envelope calculations In the UK, showing that Weather Dependent Renewables are approximately 16 – 17 times more expensive in both capital and lifetime costs when compared to the use of Gas-fired Generation technologies.

The excess costs over using Gas-firing of the current UK generation fleet amount to some 90€billion and the long-term costs approach a further 400€billion.

If the objectives of using Weather Dependent Renewables were not confused with possibly “saving the planet” from the output of the UK’s small amount of Man-made CO2 produced by the UK for electricity generation, their actual cost in-effectiveness and their inherent unreliability, Weather Dependent Renewables would have always been ruled them out of any engineering consideration as means of National scale electricity generation.